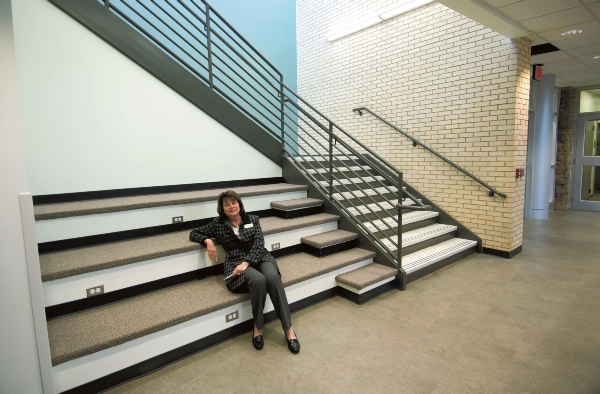 Rowan-Cabarrus Community College President Dr. Carol Spalding in2016 sits in an area near the atrium space of Building 600. In 2016, RCCC had recently finished up a construction project to upgrade several of the oldest buildings on the North Campus in Salisbury. Jon C. Lakey/Salisbury Post File Photo

SALISBURY — After nearly six years, RCCC is ready to show off its new duds: a refaced health and sciences building on the North Campus. The school also has a renovated court yard and spruced up its student services building.

Planning for the remodel began in 2010 with the passing of the 2010 Rowan County bond referendum. The $12 million received got a $2 million boost with a grant from the U.S. Department of Commerce’s Economic Development Administration.

Classes in the health and sciences building continued as usual during the nearly year and a half of renovations, putting students cheek to cheek with the facility’s major facelift.

Part of the extra 30,000 square feet is filled out by an atrium where students can spend time between classes, do homework or collaborate. A row of brand new classrooms lines the outer wall and and come equipped with “lots of bells and whistles.” The rooms were designed with an eye on lighting and sound, and teachers have access to a short throw projector — which can transform any board into a smart board — and integrated technology podiums. Each classroom was designed with lighting and sound in mind.

“We want these classrooms to be the most conducive to learning we can make them,” Spalding said.

The building’s bright new face is turned towards Interstate-85, and Spalding said it’s “a new front door to Salisbury” for visitors driving north.

In addition, old classrooms have gotten a makeover with new paint and technology. The school’s dental assistant program has moved to new, larger labs and can now accept four extra students per year.

Two new labs stand empty. RCCC’s new occupational and physical therapy assistant programs are still waiting on funding for equipment. Exercise equipment, furnishings for a practice home and other tools will be purchased should the college fulfill the Leon Levine Foundation challenge grant.

In the meantime, money from the recent 2016 Connect NC Bond will be used to spot renovate other areas on the North Campus.

The grand opening for the health and sciences building will be March 31 from 4-7 p.m. and is open to the community.