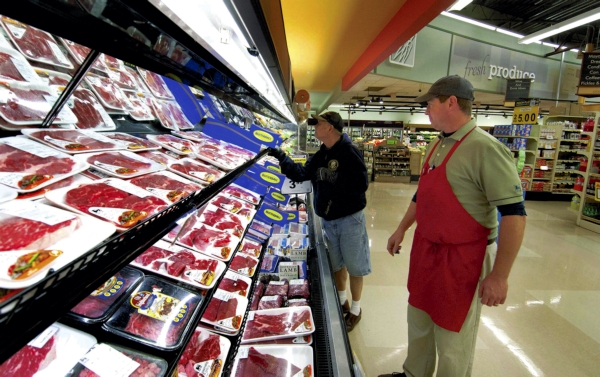 Scott Bauguess checks the product in the coolers in the meat department at the Food Lion store at Westland Shopping Center in Salisbury. Bauguess has been working for Food Lion, Rowan's largest employer, for 18 years. Jon C. Lakey/Salisbury Post

“We really mirror the communities we operate in,” Stone says.

Store positions make up the majority of Food Lion’s associates across all states, and part-time work is the norm, according to Stone. That gives store managers and employees flexibility, she says.

It’s a misperception, though, to think only of store jobs when one thinks of Food Lion, Stone says, especially here in Salisbury. Some 1,00 people work in the company’s corporate offices off Executive Drive filling a wide variety of positions — jobs in finance, human resources, construction, real estate and much more. It takes a lot of support staff to keep a chain of 1,100 stores going, she says.

Some 775 people work in the company’s distribution center, and then there are the drivers who keep goods moving.

Food Lion is known for career advancement success stories. Antoine Grant, the company’s 2013 store manager of the year, started as a 16-year-old bagger. Tom Smith, who became  president of the company in 1981, also started as a bagger.

And long before Stone became a vice president, she started with the company as a part-time cashier. Now it’s her job to make sure that the company attracts and hires the most qualified people and then sets them up for success.

All told, the company has about 66,000 employees. The most difficult jobs to fill are deep expertise roles in information technology, Stone says — a challenge across nearly all industries.

Turnover is a fact of life in retail; it’s not uncommon to have 30 to 40 percent turnover annually, Stone says. There are always jobs to fill. Entry level positions in the stores do not all require a high-school diploma.

The company encourages education through a tuition reimbursement program for full-time employees, a “highly valued benefit,” she says.

Stone has good things to say about Rowan County workers.

“In our opinion, it’s certainly been a workforce that’s met our needs,” she says. Food Lion has found talented and qualified people here, and only a small percentage of jobs require the company to recruit outside the area.

Food Lion is a good place for the person who wants work part-time or someone that wants to make a lifelong career in the supermarket business, she says.

“We are a great company to work for.”

Spirit of Rowan: How far we’ve come: The economic…