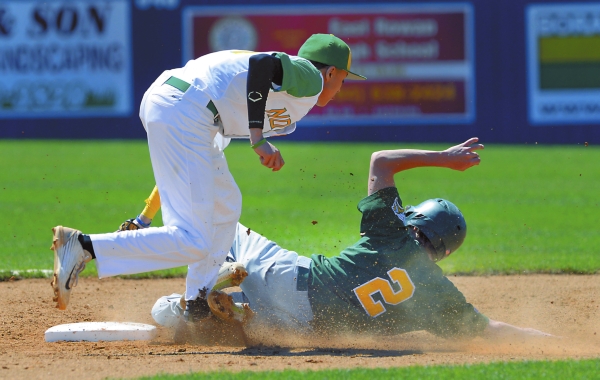 GRANITE QUARRY — North Rowan lined out often at Staton Field on Monday afternoon, but coach Aaron Rimer didn’t blame the baseball gods for a painful, 2-1, East Rowan Eastern Classic loss to Central Cabarrus.
“We deserved to lose because we didn’t do what we needed to do,” Rimer said. “We didn’t need more hits to win this one. All we needed was to execute at the plate and make better outs — productive outs. We swung a little bit selfish. We had guys popping up and striking out when they needed to be moving runners.”
Deserving some of the credit for those unproductive outs was Central Cabarrus junior Cam Kepley, who went the distance on the mound. Kepley struck out four and walked three. He shut out the Cavaliers (7-5) until they pushed across an unearned run in the seventh.
“They’ve got good fastball hitters, and they were sitting dead-read, but we were able to mix in some breaking balls,” Kepley said. “Location was the biggest thing. Nothing good would’ve happened today if I hadn’t been able to locate pitches in key situations.”
The biggest play was made by Central center fielder Andrew Kitts. North’s Holden Lanier drove a pitch deep to left-center in the third inning with two men out and the bases loaded.
When the ball soared off Lanier’s bat it looked like a certain two runs, and maybe three runs, for the Cavaliers, but Kitts made a running grab as he started up the slope in front of the fence.
“I had a bead on the ball and I felt like I was going to get it,” Kitts said. “Then I saw the warning track, and I felt my right foot hitting that hill, but I was able to hold on to the ball.”
The only person in the ballpark who was sure Kitts would make the catch was Kepley.
“I’ve seen him make a lot of great plays,” Kepley said. “I knew he’d make that one. I was walking toward the dugout.”
Kitts went 0-for-3, but his glove won the game for the Vikings.
The other guy who came through for the winners was tall first baseman Bryson Biddy, who is also one of Central’s top pitchers. Biddy lashed a two-out, two-run single over North second baseman Corbin Smith’s head in the third inning to give the Vikings, the home team, a 2-0 lead.
It stayed 2-0 a long time.
“That was the kind of timely hit we weren’t getting earlier in the year,” Central coach Ronnie Bost said. “It was still early, but when we had that big third inning, we seized momentum, and baseball is all about momentum.”
North had nearly gotten the final out of that decisive third when Lanier smothered a hot smash by Kepley, scrambled to his feet and fired to first. But Kepley was ruled safe on a bang-bang play just moments before Biddy delivered.
Lee Sells pitched well for North for five innings. Both runs that were scored against him were unearned, as the third inning began with an error on a groundball. He should’ve been in the dugout before Biddy got to the plate.
“Lee did his job,” Rimer said. “Most of his innings were a smooth ride. They didn’t threaten him very much.”
North turned three double plays, two for Sells and one for Brandon White, who relieved and pitched a scoreless sixth.
It was a frustrating day for North’s offense, especially in the third. Trey Stoner and Henderson Lentz got on base to start that inning, but Kepley got a strikeout and a popup before Lanier’s loud out.
North couldn’t cash in back-to-back singles by Robbie Monroe and Steven Thurston in the fourth, and wasted Jake Pritchard’s leadoff double in the sixth.
Down to its final out, North finally got on the board when Smith singled home a run, but Pritchard, who is batting .400 with a team-high 10 RBIs, popped up to end the game.
Central started the season 1-5 but is now 5-7, including a pair of 2-1 victories over North.
Central’s been winning with pitching and defense. The team batting average is .212.
“Winning games against South Rowan and East Rowan gave us a lot of confidence that we can compete,” Bost said. “We’ve got a scrappy bunch of guys and they’ve started to believe that if you play hard enough, you can control how lucky you are.”
Central, 1-1 in the tournament, plays West Iredell at 7 p.m. tonight at Staton Field. North Rowan, 0-2 in the tourney, plays a 4 p.m. game against East Rowan.