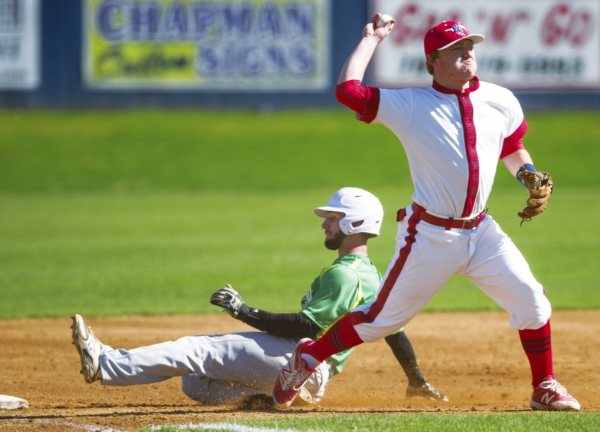 ALLISON LEE ISLEY/SALISBURY POST... East Rowan third baseman Jackson Justus throws to first base, completing a double play. He had already stepped on third base to force out North Rowan’s Jake Pritchard (behind).

But North limped out of the tournament, 0-3, following Tuesday’s 7-2 loss at Staton Field to the host squad.
“North has a good team,” said East Rowan pitcher John Owen, who bumped his record to 5-1. “But that’s a 2A team that’s going up against 3As. And everyone in this tournament came to play.”
North (7-6) went 0-fer against a trio of South Piedmont Conference teams, including SPC co-leader West Rowan, but the Cavaliers had chances in all three. North held a 2-1 lead against East (9-5) until the fifth inning.
“We just ran out of juice, ran out of gas, ran out of arms,” North coach Aaron Rimer said. “I’ve got no complaints about our effort. We battled.”
North didn’t catch any breaks on pitching match-ups. It ran into three No.1 starters in West’s undefeated Bryan Ketchie, Central Cabarrus’ Cam Kepley and Owen.
“Three aces in four days is tough for anybody,” Rimer said. “We saw three arms as good as we’ll see all year, no matter how long we play.”
North was the home team at Staton Field, a situation that may have confused late-arriving fans.
“It was weird being the visiting team here,” said East masher Ike Freeman, who went 3-for-3 and walked in his other two at-bats.
Rimer put his best hurler, senior lefty Brandon White, on the bump, but he was greeted by a first-inning homer by Freeman.
“The coaches told me he’d try to tail his pitches away from me,” Freeman said. “I went up there thinking backside, but then he tried to come in on me. He’s a tough pitcher, but I hit it out.”
The homer was Freeman’s second of the season and fourth of his career.
North grabbed the lead in the third frame. Joe Harrison led off with a solid single, and one out later, Jake Pritchard walked. Henderson Lentz’s groundout advanced both runners and brought Holden Lanier to the plate.
“I got behind him 2-0 and we figured he’d be looking for a fastball, so I threw him a curveball,” Owen said. “But it was almost like he was sitting on a curve. He hit it hard.”
Lanier’s towering shot to left nearly left the park. It landed at the base of the wall and both runners scored easily, putting the Cavaliers on top.
But those were the only runs Owen would allow.
White, who will soon sign with Belmont Abbey, struck out five Mustangs on his first tour of their lineup. He walked two in the third, but he worked out of it. Pritchard, North’s catcher, threw out a base-stealer to help White put up another zero in the fourth.
But East’s fifth inning proved decisive. Jordan Wise’s walk and a Freeman single set the table. When Owen made contact on a tough 0-2 pitch, North got a force-out at second, but runners were on the corners.
Then Chandler Blackwelder delivered a run-scoring double, a smash to left-center that made it 2-all.
“That was the biggest hit today,” East coach Brian Hightower said. “That hit took the pressure off everybody. Then we strung together some decent at-bats.”
Blackwelder’s hit got White out of the game, and Rimer turned to a weary bullpen.
“White had been holding us down,” Hightower said.
Harrison pitched to only one hitter and walked Jackson Justus. Noah Gonzalez got a ground ball from Tanner File, but the go-ahead run scored. A balk put East ahead, 4-2, before Gonzalez could escape the inning.
“If we’d been able to hold the lead and get them out in the fifth, we win the ballgame,” Rimer said. “But we didn’t get out of it.”
In the sixth, Gonzalez walked the first two batters, and his night was over. Freeman welcomed new hurler McGuire Smith with a run-scoring single. Then Blackwelder added a sac fly to push the lead to 6-2.
In the seventh, hits by File, Will Brown and Wise put another East run on the board.
East sent 40 men to the plate, so the Mustangs could’ve scored a lot more. They stranded 12 base runners.
There were two defensive gems, a diving catch in left by North’s Harrison and a charging, barehand maneuver by Freeman at shortstop. Both plays came in the second inning.
“I thought (third baseman Jackson) Justus was going to get to that ball, but I beat him to it,” Freeman said. “I got a perfect bounce, and I was able to make an accurate throw.”
Owen faced only 29 men, trusted his defense to make routine plays and breezed along. North didn’t mount a serious threat after Lanier’s big hit in the third.
“When John steps on the mound, we’ve got a lot of confidence that we’re going to win and we usually play well in the field,” Freeman said.
Owen is 5-1, which means the Mustangs are 4-4 when someone else gets the decision.
“All of our pitchers have done a decent job,” Hightower said. “We’ve just got to swing it better than we have, and maybe today was a start.”
East went 2-1 in the tournament, edging West Iredell, 2-1, and losing to the Greater Cabarrus Stallions, 4-1.