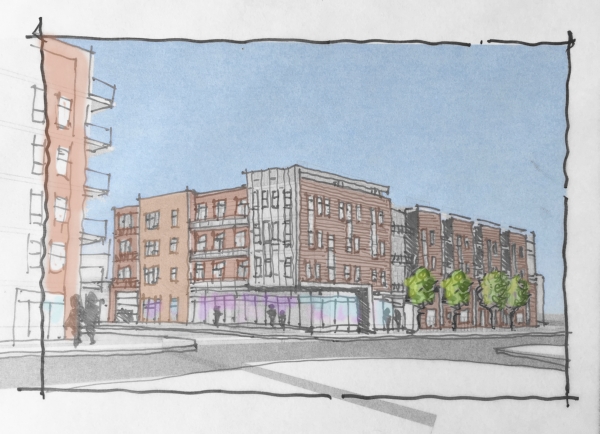 KANNAPOLIS – The Kannapolis City Council is considering approval of what would be its first major downtown revitalization project since the city bought 50 acres in the heart of the city last September.

Monday, the council met with the Development Financial Initiative (DFI), who outlined feasibility data for a residential and retail demonstration project.

The project, to be located at the 200 block of West Avenue, would be a three-building complex of apartments, a parking deck, retail and restaurant space.

Marketing and site analysis demonstrated that residential units are sought after and needed to generate a core of people who will then drive more retail and dining growth in downtown.

The proposed demonstration project would include a range of residential units: studio, one-bedroom and two-bedroom apartments. DFI presented data showing the project could potentially support approximately 200 residential units. The square footage and rental rates would be comparable and competitive to others in the region.

Developers will be sought to purchase the land and to construct the buildings. The city’s investment would be construction of the parking deck. Preliminary financial projections show that, once completed, the project would generate $236,000 annually in property taxes.

Construction could be underway in spring 2017 if council approves the project and a developer is secured later this year.

“Our research has shown this project will be a key igniter for our downtown revitalization,” said Kannapolis City Manager Mike Legg. “People who are living in a downtown drive the economy by expecting to have shops, restaurants and entertainment options with walking distance.”

Legg said the city had received inquiries from developers and businesses excited about the opportunity to be a part of Kannapolis’ future.

Council directed staff and DFI to proceed with preparing a request for proposal document to seek a developer for the project. At the next regularly scheduled business meeting on April 25, council will decide on approving the  document and the preliminary plan for the demonstration project. The open solicitation of developers would then be done over the next three to four months,  a typical timeline for this type of project.

The strategic planning process for the revitalization of downtown Kannapolis has six key components, many of which are completed and are nearing completion as scheduled this summer: