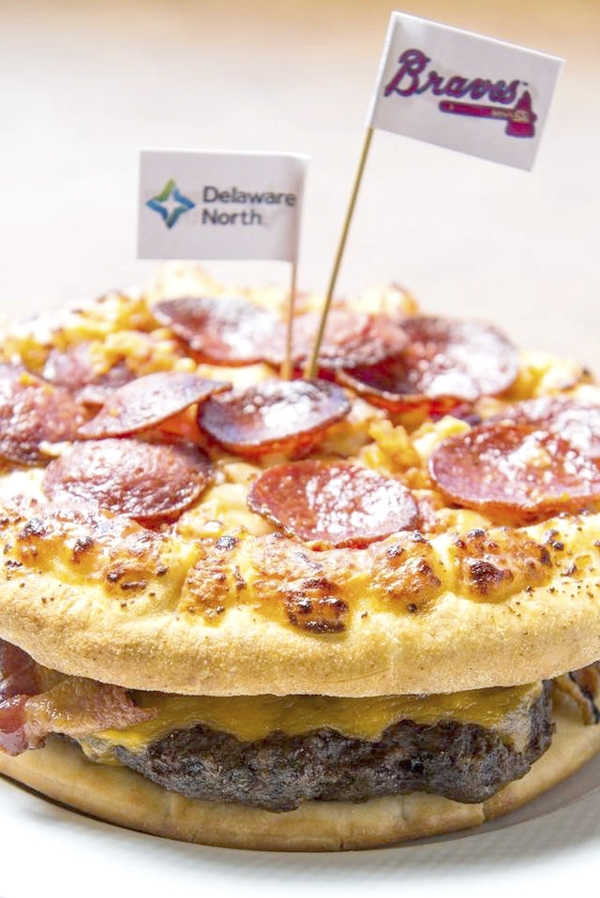 The Atlanta Braves are offering a series of gut-busting dishes at the stadium, including this Burgerizza. It's only $26.

By eating less meat and more fruit and vegetables, the world could prevent several million deaths per year by 2050, cut planet-warming emissions substantially, and save billions of dollars annually in healthcare costs and climate damage, researchers said.

A new study published in the Proceedings of the National Academy of Sciences is the first to estimate both the health and climate change impacts of a global move towards a more plant-based diet, they said.

Among the savings: A diet with plenty of fruits and vegetables, limited red meat, sugar and total calories could avert 1.5 million deaths per year by 2050; it could cut food-related greenhouse gases by 29 percent — a vegetarian diet would cut them by 63 percent, and a vegan diet by 70 percent; it could save $700 billion to $1 trillion per year on health care, unpaid care and lost working days.

The most dramatic effects would be seen in developing countries. Lowerng red meat consumption would have the most benefit in East Asia, the West and Latin American; booting fruit and vegetable intake would help in South Asia and sub-Saharan Africa.

But it’s not easy – it would mean reducing red meat use by 56 percent and increasing fruit and vegetables by 25 percent. Humans would also need to consume 15 percent fewer calories.

Researchers found adopting any diet that is healthier and more environmentally sustainable would help.

Here’s the counterpoint to that. Research in Finland shows that vegans may not be getting enough protein, berries, fruits and nuts in their diets because they rely more on fortified foods and supplements.

While we’re trying to be more healthy, consider this: another study, published in the journal Pediatric Obesity, has found that middle-school student who did not eat breakfast or only occasionally did had twice the risk of obesity of those who ate breakfast regularly.

Student who ate at home, then again at school were not at a higher risk for obesity compared to those who ate just one breakfast.

Ballpark concessions have gone far beyond peanuts and a simple hot dog. First it was nachos, then giant drinks, but now, you can buy such calorie- and fat-laden creations as The Burgerizza, a grilled 20-ounce beef patty, covered with five slices of cheddar cheese, topped with crispy bacon, and served between two 8-inch pepperoni pizzas. All for just $26.

These foods are being served at Turner Field, home of the Atlanta Braves, until they move to a new stadium next year. It’ll take you about that long to burn off the calories of just one of these monstrosities.

More of a hot dog fan? Check out The Everything Dog, a $15 foot-long hot dog layered with fries, chili, nacho chips, beer cheese and jalapeños, topped with popcorn and drizzled with Coca-Cola-infused BBQ sauce, served in a pretzel bun.

Or, the Punisher, country-fried smoked rib meat slathered in a Monster Energy-infused BBQ sauce, topped with a fresh cut beer-battered onion ring and “slawsa” (because, why choose between slaw and salsa?), tucked between a toasted and buttered Hawaiian bun and pinned in place with two slices of candied bacon. Cost: $18.