Patrick Gannon: A demonstration of power by Republicans 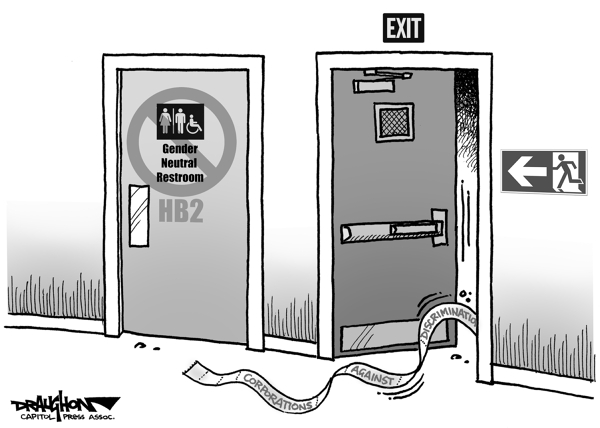 RALEIGH — Last week’s special legislative session was about bathrooms and safety and gay and lesbian and transgender rights.

But in the big picture, it was about power. And right now, General Assembly Republicans hold all of it in the capital city.

The Republicans who dominate the General Assembly with supermajorities in each chamber proved they can wield a big stick whenever they feel the need. And they proved that they won’t hesitate to do so when they feel threatened or disrespected.

Charlotte’s nondiscrimination ordinance threatened the power of General Assembly Republicans over cities and towns and disrespected some legislators’ personal beliefs.

That city’s new law, which would have taken effect April 1, would have allowed transgender people to use either men’s or women’s bathrooms, depending on the gender with which they identify. It also would have prohibited Charlotte businesses — such as bars, restaurants, stores and taxis — from discriminating against gay, lesbian or transgender customers.

After its 7-4 passage by the Charlotte City Council, state Republican leaders quickly spoke out about the transgender aspects, claiming it could open the door to men using women’s restrooms and shower facilities by saying they identified as women.

General Assembly Republicans proved that they could whip their base into a frenzy across the state by playing on fears about such occurrences, even if they have happened very few times in places with laws like the one Charlotte passed.

They proved that they could get enough GOP legislators’ signatures to convene a special session, even if Gov. Pat McCrory decided not to bring them back himself.

They proved they could draft a bill largely in secret, file it at mid-morning, start debating it minutes later, pass it that afternoon and convince the governor to sign it the same night.

They proved that they could hold public hearings on the legislation to make it appear that the process was sound, even if they knew the bill would pass almost exactly as it was written when introduced.

General Assembly Republicans proved — as they have many other times in recent years — that cities and towns are beholden to them. They proved the N.C. Constitution gives them almost unlimited power over municipalities.

State Rep. Nelson Dollar, a Cary Republican, echoed the words of many GOP colleagues during the one-day special session.

“We do not need any municipal government acting outside of its authority, especially when they are trying to make political statements,” he said.

And I think the Charlotte issue proved that Republican leaders have power over their individual members. I’d be shocked if at least one House or Senate Republican didn’t have serious reservations about House Bill 2, yet every Republican voted for it. No one had the courage to be the one Republican to jump ship. That probably wouldn’t have boded well for his or her political future.

And Republicans who control the statehouse proved that the things they do have repercussions nationwide — good or bad.

They proved their almost limitless power in this state at this moment in time.

Patrick Gannon is editor of the Insider State Government News Service in Raleigh. Reach him at pgannon@ncinsider.com.