The Dart: It’s about more than softball for the Rowan County Swarm 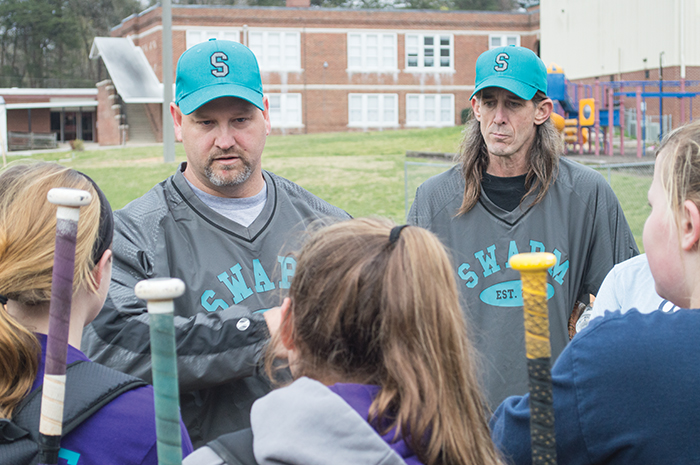 Josh Bergeron / Salisbury Post - Rowan County Swarm Coach Bob Teague, at left, talks to members of the 14 and under team during practice on Sunday, March 20.

Wins and losses are only part of the experience associated with the Rowan County Swarm’s softball teams.

The Swarm is a group of travel softball teams started about two years ago by a group of Rowan residents. Initially, there was a single team. Now, the Swarm includes five total travel teams for three age groups — 14 and under, 10 and under and 8 and under. Coach Bob Teague, one of the founders, said he started the Swarm to prepare girls in middle school for high school softball.

When The Dart landed near Faith Elementary school, one of the Rowan County Swarm teams was in the midst of a practice. A small group of parents sat in bleachers behind the field, letting out the occaisional “ooh” or “ahh” after a notable play.

“We were playing rec ball in another league in the area and we noticed that the quality of ball was different when we watched travel tournaments then watched high school,” Teague said. “We knew we couldn’t stick within the rec ball realm.”

Teague said athletes are more likely to stick with a sport if they’re well prepared and have experience.

“If they’re prepared going into something, I think they’re more apt to stay with it as opposed to someone that’s never played the game or doesn’t have the skills,” he said. “They’ll walk out on the field and compete against other girls that are ready. They might say, more or less, ‘Dad, I don’t want to do this. I’m done and they’re so much better than I am.'”

The team includes girls from across the region, said Chris Samples, a coach and co-founder. He listed China Grove, Mt. Pleasant and Gold Hill as examples. The Rowan County Swarm even has a world champion on one of its teams. Liza Simmerson, who played on the Rowan Little League team that won the World Series, plays in the oldest age group of the Rowan County Swarm.

In the midst of playing softball, however, the Rowan County Swarm have also managed to complete a good bit of charitable work. Teague said each team has paid to sponsor a local family at Christmas. Members of the Swarm have also volunteered at a homeless shelter. A food drive is a possibility as a spring project, Teague said.

“We wanted to give back to the community with the way we’ve been blessed with the community letting us use their field,” he said. “Our goal is not only to teach them how to play softball, but to teach them lessons they can use in every day life. Most of them will get out of high school and might not play this game again, but they can take the lessons they’ve learned and apply them to every day life.”

The Swarm regularly practices on a field at Faith Elementary School. Before the team could start practicing at the field, coaches spent hours cleaning dugouts and manicuring the field. Teague joked that the field had an unintentional, grassy infield. The Faith field, coaches said, has been at the school for years and unused for a significant period of time.

Teague said he was grateful Faith Elementary lets the Rowan County Swarm use the school’s field.