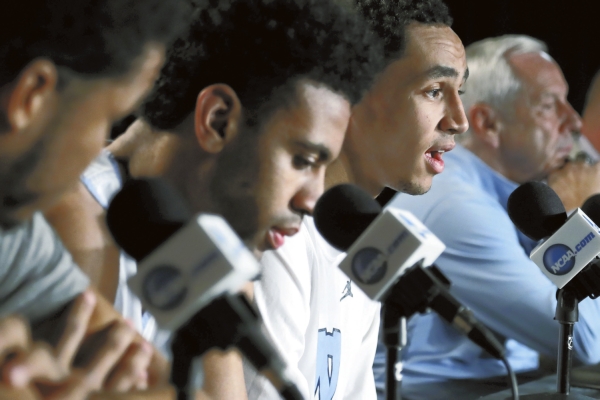 This mini-Atlantic Coast Conference Tournament has even higher stakes than usual: The winner earns a spot in the national championship game.

The entire right side of the NCAA Tournament bracket has boiled down to four teams — and they’re all from the ACC, with North Carolina and Notre Dame in the East, and Virginia and Syracuse in the Midwest.

The Tar Heels and Fighting Irish play Sunday in the East Regional final in Philadelphia, with the Cavaliers and Orange facing off in the Midwest final in Chicago. Because those regions are paired in the Final Four, those winners will meet next Saturday night on the big stage in Houston with a spot in the national title game on the line.

“I just remember the grind of the Big East and this is the same grind with the depth of this league now,” Brey said Saturday. “Everybody talks about our league now and the matchups.”

The ACC got off to quite the hot start in this tournament, finishing the opening weekend with a 12-1 record.

It joined the Big 12 and Big Ten in placing seven teams in the field but outperformed those leagues by having six of them — all but Pittsburgh — reach the Sweet 16. And who knows how far a likely eighth team — Louisville — would have advanced, had the Cardinals not self-imposed a postseason ban for this year?

“I happen to think the ACC is the best league from top to bottom, the depth we have,” North Carolina coach Roy Williams said.

Miami and Duke bowed out in their regional semifinals on Thursday night before ACC schools went 4 for 4 in the Friday night games.

As the top seeds in their regions, North Carolina and Virginia expected to be here. Notre Dame, the No. 6 seed in the East, and Syracuse, the 10th seed in the Midwest, were the ones left standing after some higher seeds from the other power conferences went down in earlier rounds.

It’s the first time that one conference has placed four teams in the Elite Eight since 2009 — when the old Big East had Connecticut, Villanova, Louisville and Pittsburgh make it this far.

The ACC is assured at least 19 wins in the tournament, breaking the record of 18 set by the Big East in 1985 — when that league put three teams in the Final Four.

Syracuse coach Jim Boeheim says it’s “too simplistic” to measure the strength of a conference by its success in the tournament, though he added that “it certainly is relevant.”

“What does it really all mean?” he asked rhetorically, then added with a chuckle: “Nothing.”

These regional finals and one of the two Final Four matchups look an awful lot like the bracket at the ACC Tournament two weeks ago in Washington.

North Carolina’s path to its first national championship game since 2009 — first Notre Dame, then Virginia — could be identical to the one it took to the ACC title. The Tar Heels routed the Irish 78-47 in the ACC semifinals before edging the Cavaliers 61-57 in the league title game.

“I guess if I was (Notre Dame), I would try to use that ACC game — like if it was us that got blown out, we would be talking about that nonstop up until the game,” North Carolina guard Marcus Paige said.

“I don’t care what happened in the past,” he added. “And I’m sure they don’t either. This is a one-game opportunity to change your season.”