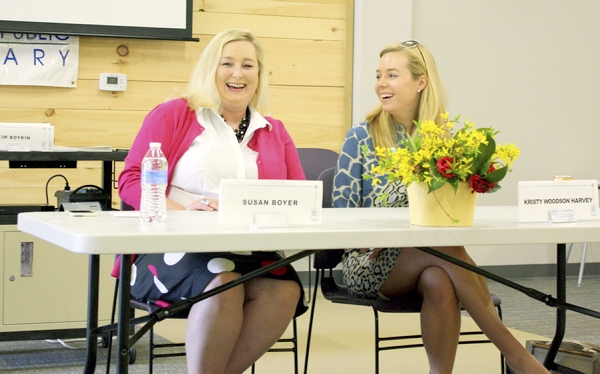 What is it about Rowan County and writers? How are we so lucky to claim so many, of all genres, at all levels?

Two of our writers spoke and signed books recently at the Rowan Reading Rendezvous. Mystery writer Susan Boyer, brought up in Faith, and women’s fiction writer Kristy Woodson Harvey of Salisbury sat on a panel to talk about how they arrived as authors.

Boyer has been gone a number of years. Harvey just a few, but she says “Salisbury is my home, It’s the place that got me started on this path.”

Boyer tells how her mother took her to the library and she’d bring home stacks of books. “I was a library rat.”  She fell in love with mysteries and small Southern towns and anything Southern. “I love solving a puzzle,” she said.

Harvey has great memories of the library. too, saying it’s where she learned to make choices on her own. “By the time I was in third grade, I looked for things with thick spines.” That’s how she stumbled on “A Tree Grows in Brooklyn,”  one of her favorites. “Francie’s life was nothing like my life, but she was reading and I was reading…no matter where we come from we can do that.”

Boyer agreed, saying humans have used stories to learn things for a very, very long time. She “always wanted to make things up” and found you share experiences through books.

Boyer read Trixie Belden, Nancy Drew, then romance novels, then Phyllis Whitney and Mary Stewart, and now reads Sue Grafton and Robert B. Parker. “I like series. I can get invested in the character.”

She thought she’d be getting coffee and filing, but “got to do the stories no one else wants, like the Garden Game,” a feature about weird or large fruits and vegetables. “All those people had a great story to tell.” When she got to UNC, she already had plenty of clips, and that impressed one of her professors.

Boyer’s path was circuitous. She did lots of other things, kept changing majors. She liked drama, she went to Catawba College for a while and took computer science as her math, so she was a programmer for a while, then a business analyst and up the ranks, but the company folded in 2003. Her husband suggested she write a book, which she did, and found success.

Harvey “did all the things you were supposed to do to be a journalist.” Then she saw the man she would marry and decided to skip law school, which her father wanted her to attend. She went to ECU and got a master’s degree so she could teach and she did that for a while, then the program was cut, so she ended up working for Northwestern Mutual for a while. “In that business, you get used to hearing ‘No’ a lot. That gave me the nerve to write a novel.” And she did hear ‘No’ a lot.

Boyer said everything she’s done helped her become a writer.

Writers have more options now. “You can chase an agent, you can go to a small press, many people self publish. … Being a writer is like being a small business, there are a lot of things to do,” she said.

Harvey did’t know the first step to publishing, but she went the traditional route, finding an agent. Then she won a writing contest and Penguin bought her book.

It was a long process and she wrote freelance to bring in a paycheck.

Harvey has a 4-year-old who’s in preschool and writes for 90 minutes in the morning. Boyer prefers mornings, too, but also writes in the afternoon.

“Do people ask you if they’re in the book,” Boyer asked Harvey. She said people ask her, “‘Who am I in the book?’ I never do that. I might use things people say or do … but no person in the book is real.”

“If you have a real person in your head, they become so different while writing, you start off knowing the person, but they change so much,” Harvey said.

The two approach writing in different ways. Susan knows her characters, since it’s a series, and the plot, and says the books are plot-driven. She plots the whole thing out before writing and “knows how it will work out or it all gets too convoluted.”

“I’m the exact opposite,” Harvey said. “I don’t know what the story is going to be. I’m very character-driven.” When she wrote papers in school, she built the outline after she finished. In the manuscript she just submitted, things turned out in the opposite way she expected. “The characters did things differently.”

Boyer and Harvey have more books to come. Boyer’s most recent books is “Lowcountry Bordello” and Harvey’s new book, “Lies and Other Acts of Love,” will be released April 5.