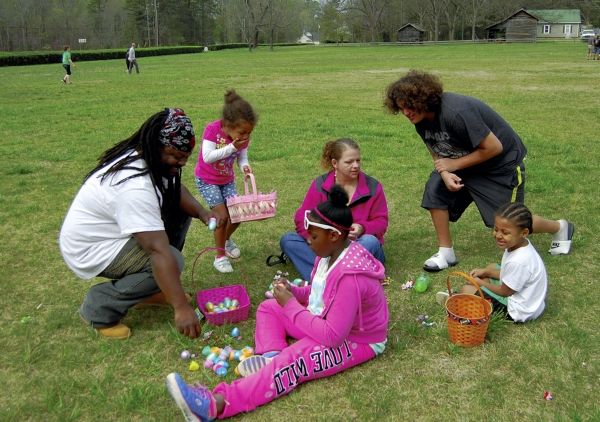 Amanda Raymond/Salisbury Post Donell Yarborough (left) and Kisha Pompper (middle) help their children and niece put empty eggshells in one basket and candy in another. Thousands of families gathered at Dan Nicholas Park for its annual Easter Egg Hunt on Saturday.

Andrea Baucom knows to get out of the way once she yells “go” for the Easter Egg Hunt held at Dan Nicholas Park every year.

This year was no different. On Saturday morning, somewhere around 2,000 people, maybe more, gathered at the park to let children from infants to 10-year-olds collect as many pink, yellow and blue plastic eggs as they could.

“It was one of the biggest ones I can remember,” Baucom said.

Children from infancy to age 5 went first, and then children ages 6 to 10 got their chance.

It isn’t much of a “hunt” because none of the eggs are particularly hidden. Park employees arrived at the park at 9 a.m. to manually throw out the 14,000 eggs into the grassy field, Baucom, special events coordinator, said.

Baucom said the park ordered the eggs pre-filled with candy and chocolate. There were also white slips of paper that the children could redeem for prizes such as stuffed Easter bunnies, bubbles and sidewalk chalk.

At the end of the event, families sat out on the field to take stock of their findings.

Donell Yarborough and Kisha Pompper, from Lexington, said they have been coming to the egg hunt for eight years. This year, they brought their children and niece to the event.

“It’s more of a rat race than fun, but it’s still fun though,” Pompper said as the children put empty eggshells in one basket and the candy in another.

Jessica Varner said she has been bringing her two children to the event for three or four years.

“They really liked it,” she said.

Baucom said even the parents enjoy the event. Parents are asked to let their children pick up their own the eggs if they are able, but that doesn’t mean parents just sit back and watch. Baucom said one man was standing in the field with an egg and a piece of candy between his feet, guarding the prizes until his child could come and pick them up.

Between the egg hunt and a jellybean guessing competition, the park gave away 200 prizes, Baucom said.

Although there have been some years during which attendees had to wear coats, gloves and scarves, this year the weather was cloudy but warm.

As the field cleared and families went to redeem prizes, only a few empty eggshells remained — as if the hunt never even happened.