Mike Cline: The gridiron was not for me 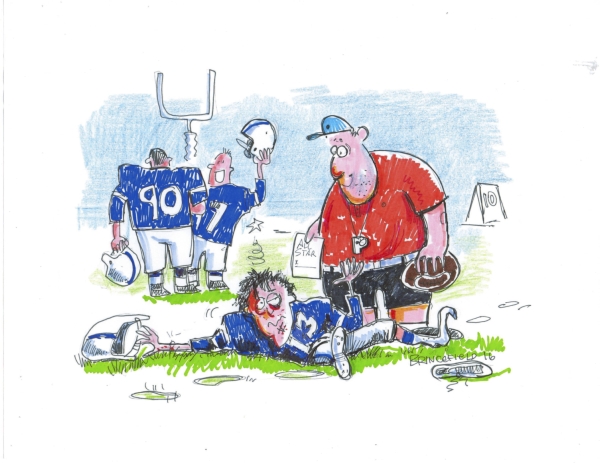 A month or so ago during football season, I wrote about my youth baseball experiences. And now that baseball season has arrived, it’s time to put to paper my exploits in youth football.

My intent is not to confuse anyone. It’s just that when my weary brain spits out memories from my long ago childhood, I have to write about them then, else they’ll be reabsorbed, and I may never recall them again.

So, when the start of fifth grade came around, all the talk from my buddies in the neighborhood and at school was that it was time to sign up for the citywide youth football league, sponsored by the Recreation Department. We had reached the minimum age limit.

I wasn’t crazy about enrolling, but because of that evil thing called peer pressure, I decided I’d join my friends. It wasn’t that I disliked football. I loved to play in neighborhood games.

In fact, I was pretty decent at it. Even though I was a bit short for my age, I could catch and had really good speed, so I could outrun many of the neighborhood guys.

I should mention that I’m speaking of touch football. We never played tackle in our yards, at the insistence of our moms.

This city league, known back then by the insensitive name of Midget Football, was tackle. Ouch!

All the fellows on the street went and registered as a group. We knew we would all be on the same team, because just like baseball, teams were determined by one’s geographical location in the city limits. My friends and I would be Rams. The members of the Colts, Giants and Redskins (more insensitivity) came from the other areas.

We paid our entry fees (probably no more than five bucks) and received our dark blue uniforms, along with a doctor’s physical form which had to be filled out and returned, else we couldn’t participate.

My parents had to spring for my rubber cleats. Everything else was furnished. Naturally, my mother didn’t want me to play at all, fearing severe injury to her only offspring, but my father had no problem with it.

“All boys play football,” he said.

My best friend’s father was also my doctor. So my buddy told me he would call me when his dad came home that afternoon, and I could come up and get my medical form signed. Near dinnertime, the phone rang, and I was told to come on over. So I rode my bike the three houses up the street and found his dad resting in his chair after a long day.

“Dad, Mike’s here for his physical.”

“You feel all right today?” he asked me.

He signed the form without even leaning up in his recliner. I had been thinking the procedure would include the usual things that take place during a physical examination, i.e., blood drawn, a urine sample, poking and prodding, and maybe even a rubber glove, but not this time.

He just signed it. Today, he’d probably have to answer to a medical board and maybe lose his license, but those days were, indeed, a simpler time.

The first day of practice (at a softball field about half-mile from my elementary school) found all the Rams assembled, awaiting our coach’s arrival. He had to come straight from his job. And when he did show up, was I ever surprised? It was my first cousin, about 15 years my senior.

I immediately went over to him to say hello, and he instructed me to get back into the line. Oh, well, so much for nepotism.

He went over the rules, his expectations from us and what would happen if we didn’t pay attention and behave.

Every practice started at 4 p.m., every single day after school, and ended when it got dark. Our practice field had no lights.

The first 15 minutes of every practice were consumed with extreme calisthenics. It felt as if I had joined the U.S. Marines. The first couple of days, I could barely get out of bed the next morning.

One more thing: I suppose I didn’t read the fine print on the info sheet that was sent home to our parents. The ages for the league were 10 to 12. I was a 10.

That meant I’d be playing against some guys in seventh grade. That meant I had to really fight for playing time on my squad. And after being knocked silly several times during practice (and these were my teammates), my playing time became less and less important to me.

After all, some of these behemoths were in junior high.

Once the games began, it was obvious my cousin and the other coaches were serious about winning. They didn’t care if every player got to play or if everyone got a trophy for just signing up. Thus, I played very little. Oh, maybe if we were winning 46-6, they’d call my number (which was 13). That should have told me something when uniforms were handed out.

I was the backup, backup right guard (just like the deodorant). I’d get to the huddle, hear the QB call the play and line up, trying to remember what play No. 8 was. The ball would be snapped, and immediately I would be leveled by a kid two years older and 50 pounds heavier than I.

Finally getting on my feet, I would head back to the huddle, only to be stopped by the starting right guard who was telling me to head for the bench.

After several games, I approached my cousin/coach and informed him that I could better help the team as a halfback, as I was as fast as lightning. So several weeks later, when I finally got back into a game, he gave me my wish.

The QB called my number for a handoff, which I grabbed and I ran smack dab into what felt like a brick wall.

I could have accomplished the same result running into the side of my house — and no calisthenics required before doing so.

Other than Christmas, the best day of that year for me was the day of our last game. Finally, I could turn in my uniform and equipment and get on with my life. But NO.

After that game, my cousin informed me my name had been submitted as one of our team’s six players for the All-Star game. Now the nepotism kicked in.

Was he crazy? I had never seen signs that he was a heavy drinker. Maybe he had run into some of those brick walls as I had. I didn’t want to do it, but my dad told me to stick it out. It was just one week of practice, then the game.

My friends and teammates couldn’t believe it any more than I could. I felt pretty badly, because some much better Ram who deserved the spot could have played.

The long week came. I practiced every day, got mowed over like a weed and did not get into the All Star game. Then it was all over.

Sometime later, I saw my cousin at a family reunion and asked him why in the world he put me on the All Star squad, considering my best run as a halfback had netted minus 2 yards.

“I didn’t want Uncle Bob and Aunt Velma to be mad at me.”

And don’t even ask me about youth basketball.

Mike Cline’s website, “Mike Cline’s Then Playing,” documents all the movies played in Rowan County theaters from 1920 to present day.

Barbara Garwood: Being a caregiver