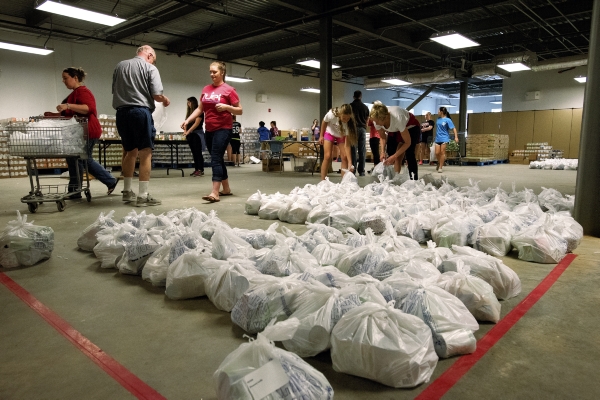 SALISBURY — Every year on Maundy Thursday, the confirmation class at St. John’s Lutheran camps out at the church and spends the night reflecting on God’s love.

“And then Friday norming they get up and put that love into action,” St. John’s Minister for Discipleship Danielle Kosanovich DeNise said.

It’s the first day of spring break, but this Good Friday, the group of middle school students formed a “packing party” for Food for Thought — a backpack program that provides weekend meals to children from food-insecure families in the Rowan-Salisbury School System

“Children that are food insecure don’t have access to enough food to meet their basic needs,” Carol Herndon, executive director of Food for Thought, said.

There are an estimated 9,000 kids in Rowan County who are food insecure, Herndon said. Currently, Food for Thought serves about 550 of them. That number has nearly doubled in the past four months, Herndon said — but the need is still large.

In the basement of Rowan Helping Ministries, the group of fifteen students packs as fast as they can, forming an assembly line with plastic bags and cans. They wear sweats, T-shirts and sneakers, ready to work. “Runners” pick up a plastic bag and ferry it between tables and carts to be filled with canned fruits, vegetables and soups.

At the end of the line, Herndon ties off the top and lines the bags up on the concrete. She said so far, the kids had packed 135 bags in twenty minutes.

“It’s amazing seeing what your work can do,” student Evan Mahaley said.

Food for Thought hosts two or three “packing parties” a week, stuffing a plastic bag with enough food for one child for a weekend. On Fridays, the bags are picked up, delivered to schools and placed in a backpack.

“I go to school with a lot of people who get these,” Anna Grace Woolly said.

Woolly stands with Madison Anderson, placing pudding and packets of raisins into each offered bag. Woolly and Anderson are the last stop on the assembly line. From there, the bags are put into neat rows that stretch out into the basement.

Anderson said she hadn’t expected there were so many kids who needed help getting their next meal.

“It’s kind of shocking,” she said.

Bags from previous parties shine bright against the dark flooring as runners move between them, down the arc of the assembly line. These packing parties are “critical” to Food for Thought’s success.

Herndon is Food for Thought’s only employee, and said the organization runs on volunteers. Everything, from the packing parties to the deliveries, is done by volunteers.

“We are just overwhelmingly blessed by our community,” she said.

For Kosanovich DeNise and the kids from St. John’s, it’s a way of expressing and claiming their faith.

“This is a particular day that we claim and practice what God’s love looks like in the world,” she said.

Thursday night, the kids learned how Jesus served others by washing their feet, Kosanovich DeNise said. Friday, they did the same.

“Coming here is our way of washing the world’s feet,” she said.