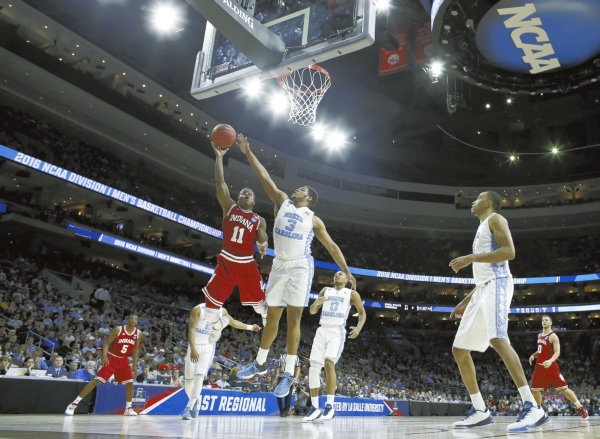 PHILADELPHIA (AP) — Marcus Paige scored 21 points and North Carolina continued its offensive prowess, moving to the Elite Eight for the 20th time since 1975 with a 101-86 victory over Indiana on Friday night in the East Regional.

It will be the same case in the Midwest Regional, where top-seeded Virginia will face 10th-seeded Syracuse, meaning at least half the Final Four will be from the ACC. The conference will also have a team play for the national title.

Brice Johnson had 20 points and 10 rebounds for the Tar Heels, who are in the regional final for the seventh time in coach Roy Williams’ 12 years and for the first time since 2012.

Kennedy Meeks had 15 points for the Tar Heels while Justin Jackson and Joel Berry II both had 14.

North Carolina has scored at least 83 points in each of its three NCAA Tournament games and the Tar Heels kept up their incredible shooting from the second-round win over Providence when they shot 60.7 percent in the second half (17 of 28).

The Tar Heels were scoring almost at will, especially inside, where the Hoosiers were no match for Meeks, Johnson and Jackson.

This was the 28th straight game North Carolina held its opponent to under 50 percent shooting. Only Maryland (50.8 percent) hit more than half its shots against the Tar Heels this season.

North Carolina led by as many as 22 points and Indiana was able to get within 10 points three times in the second half.

Paige couldn’t miss in the early going, hitting four 3-pointers and a jumper before he finally missed. The only thing that slowed him down was fouls. He picked up his second with 9:34 left and spent the rest of the half on the bench.

The Tar Heels led by as many as 16 points in the first half but Indiana scored the final five points of the half to get within 52-41.

The game was played before a sellout crowd of 20,686 at Wells Fargo Center.

This was the third time these schools met in the NCAA Tournament and Indiana won both previous games. The Hoosiers beat the Tar Heels for the national championship in 1981 and they beat them again in 1984 in what turned out to be the last college game for Michael Jordan.

Indiana: The Hoosiers became the seventh team to play in 100 NCAA Tournament games. They have a 66-34 record. … Indiana entered the game with four wins over Top 25 teams. … Indiana had never lost an NCAA Tournament game in Philadelphia, sweeping the Final Four in 1976 and 1981 for two of its five national championships. .. The Hoosiers are 5-4 all-time against No. 1 seeds.

North Carolina: The Tar Heels entered the game with five wins over Top 25 teams. … The Tar Heels are 4-1 in NCAA Tournament games in Philadelphia.