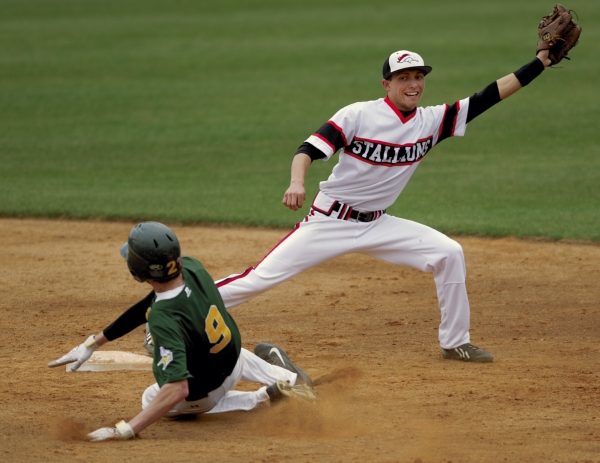 GRANITE QUARRY — The Greater Cabarrus Stallions were both efficient and opportunistic Saturday afternoon in its opening game of the East Rowan Easter Baseball Classic at Staton Field.

The Stallions (13-2) held off the Central Cabarrus Vikings, 2-0, behind the efficient complete-game pitching effort of Noah Jarrett and stellar defense up the middle by Lankford. The big plays by Lankford, with six putouts for the game, did not escape the attention of Jarrett.

“He did a great job and saved us more than once,” said Jarrett, who scattered five Viking hits and struck out seven, in improving to 4-1 for the season. “I owe him a dinner for the way he played.”

The Vikings (4-7) actually out-hit the Stallions, 5-2, but were never able to get a runner past second base, as every threat was ended by either a Jarrett strikeout or a Lankford scoop and throw at shortstop.

The most impressive play came in the top of the sixth inning when Central’s Cam Kepley doubled with one out and moved to third on a groundout. A hot shot up the middle by Jessi Woolard caromed off Jarrett’s leg toward second as Kepley raced home.

However, Lankford saved the shutout as he raced across the infield, barehanded the ball and threw out Woolard by a half step to end the inning.

All of the offense the Stallions would need came off the bat of  senior Caleb Threadgill in the third inning as they finally got to Vikings starter Bryson Biddy. A couple of walks and a fielder’s choice put two runners on with two outs and Threadgill came through with a double to deep left-center for the 2-0 lead.

Threadgill’s first-inning single was the only other hit in the game by the Stallions.

Yet despite the close score and low offensive output, the Stallions made quick work of the Vikings in just an hour and 16 minutes. It was a pace that suited Jarrett just fine.

“I like working fast because it keeps everyone in the game and keeps everyone loose,” Jarrett said, as he lowered his already minuscule 1.75 ERA with the shutout. “Close games like that are a little bit stressful but they are still a lot of fun.”

Stallions head coach Chris Lankford noted the efficient effort of Jarrett as well, revealing that he lets his pitcher and catcher Seth Cauble call their own pitches. “I let them call the game the way they want,” he said. “I will step in if needed but otherwise, it is them. Overall, our approach is to just play hard and get better each and every day.”

The Stallions will continue play in the six-team, round-robin Easter event at Staton Field next week with games against East Rowan on Monday (7:00) and West Rowan on Tuesday (1:00).