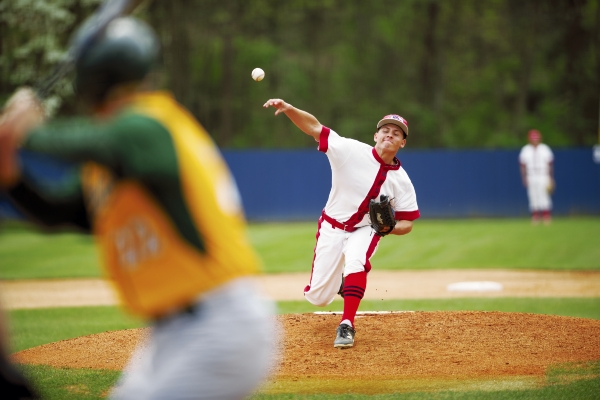 GRANITE QUARRY — East Rowan junior Nathan Hill pitched a one-hitter and struck out 11 batters, but the outcome was not decided until the final swing of the final at-bat of the game.

John Owen’s one-out single in the bottom of the seventh inning scored Hill from third to secure a tense, 2-1 win over West Iredell Saturday afternoon in the opening game of the third annual East Rowan Easter Baseball Classic at Staton Field. Hill led off the inning with a single and moved to third base on a walk and sacrifice bunt by Chandler Antosek. That set the stage for Owen’s heroics.

“Well (Coach) Hightower told me the first pitch was mine if I liked it and I could hammer it,” Owen said afterwards. “After that I would be squeezing.”

The Mustangs (8-4) did not need the squeeze play as Owen smacked the first pitch from Warrior pitcher Austin Huss over third base and down the left field line to end the game. It was a tougher than expected battle with the young West Iredell team (1-10) as East pounded out 10 hits but only had a single run to show for it until the very end.

“We hit the ball all over the park and hit it hard,” East coach Brian Hightower said. “But we hit it right at them. But they had several double plays (three) and played good defense.”

Hightower was glad to get the win anyway he could as it ended a frustrating two-game losing skid for the Mustangs.

Hill said the close game did not put any extra pressure on him. “I didn’t feel any pressure at all on the mound,” he said. “Because I knew I had a great defense behind me and I knew they would come through. ” He was effective in mixing in his slider and change-up to get the Warriors to fan 11 times including three times to end an inning.

The most critical strikeout came in the top of the seventh, when Hill hit back-to-back batters with one out in a 1-1 game. Then, he intentionally walked Austin Laws with two outs to load the bases and set up a force play. Hill ended the threat by striking out Brandon Gregory on a 2-2 pitch.

The Mustangs took the 1-0 lead in the second inning when Justus Jackson singled and Will Brown doubled. Hill then helped himself with a sacrifice fly to center to make it 1-0.

In the top of the fourth, Hill struck out three batters but the Warriors managed to tie the score with a sequence of miscues after Caleb Henderson led off the inning with a single. It was the only hit Hill would allow. But Henderson went to second on an errant pick-off throw, then was awarded third on an obstruction call at second base on another pick-off attempt. Henderson then scooted home on a wild pitch to tie the game at 1-1.

East put runners on base in both the fifth and sixth innings but each time, the Warrior defense slammed the door with double plays.

“Their pitcher had us so stifled that we could not do anything,” said Warrior coach Randy Martin. “To even be in the game with just one hit was amazing, but our pitcher (Huss) gave a good effort and our defense is what I am most proud of.”

Play in the six-team, round-robin Easter event will continue at Staton Field next week with three games on both Monday and Tuesday at 1:00, 4:00 and 7:00.