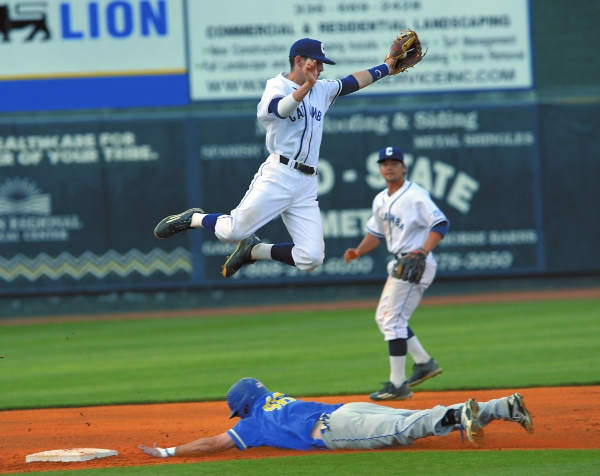 SALISBURY — Zac Almond’s walk-off grand slam disappeared over the left-center field wall at magical Newman Park and headed deep into the night, and Catawba beat Mars Hill, 19-16, in a 12-inning South Atlantic Conference game for the ages.
Almond didn’t just drive in eight runs on Friday to tie the school record, he drove in Catawba’s last eight runs. He had a two-run homer in the sixth and a two-run triple in the eighth as the Indians erased a deficit that had been as large as nine runs.
“I don’t mean to be all philosophical, but that’s just the way baseball is,” Catawba coach Jim Gantt said. “Zac was pulled from our last game (Wednesday’s win against Pfeiffer) for not running hard, and tonight he comes back with a good mindset and he makes the difference in the ballgame.”
There were 19 extra-base hits in the marathon, including four homers by each team.
Catawba (18-11, 8-5 SAC) trailed, 16-15, heading to the bottom of the 12th, and when the Indians’ all-world slugger, Will Albertson, struck out swinging to start the inning, even the staunchest Catawba supporters were starting to inch their way toward the parking lot.
But Malachi Hanes walked, Chance Bowden smashed a double, and Bryce Fowler accepted a walk to fill the bases in front of Almond.
Almond took three balls, then started to trot to first base on a borderline pitch that was called strike one. Then he picked up his bat and fouled off a pitch to run the count full.
“When the count was 3-2, I knew he couldn’t take a chance to walk in the tying run, and I knew what he (freshman Drayden Williams) had to be throwing,” Almond said. “He gave me a fastball belt high, and as a hitter, that’s what you live for. I tried to hit it through the wall. Instead, it went over it.”
While the game will be remembered as the “Zac Almond Game,” it was Catawba’s bullpen, especially D.J. Laxton and Bryan Blanton, that gave the Indians a chance to stage an epic comeback.
Laxton put up zeroes in the fifth, sixth and seventh. Blanton, normally the closer, got the last out in the ninth to keep the game tied, and then pitched the rest of the way.
Dylan Richardson smacked an early homer for Catawba, but Mars Hill hitters roughed up Catawba hurlers, including starter Shaefer Shepard.
“They’ve got some dynamic hitters and they were just hammering the ball,” Gantt said.
The Lions (22-11, 7-6) put up six runs in the third and seven more in the fourth to take a 15-6 lead.
“We kept thinking that we still had plenty of time,” Bowden said. “We knew we could get those runs back a little bit at a time, but the biggest thing was we had to slow them down. Then Laxton started putting up zero after zero.”
The hit that gave the Indians life was a two-out, three-run double by Fowler to right-center. That made it 15-9 in the bottom of the fourth frame.
Jake Kimble’s solo homer in the fifth inning and Will Albertson’s solo shot in the sixth cut the gap to 15-11. Then Almond’s two-run homer later in the sixth made it 15-13.
Catawba got a break in the eighth inning when Hanes struck out on a ball in the dirt but was able to reach first base safely. Bowden’s whistling double off the wall in left put two men on, and Almond smoked a triple to tie the game.
The bullpens took over after that, with Blanton, who struck out six, throwing tremendously for the Indians. Neither team scored in the ninth, 10th or 11th. Blanton walked a couple in the 12th and an infield hit — a shot off Blanton’s foot — by Brett Brubaker gave the Lions their first run since the fourth inning and a 16-15 lead. Blanton got the final out of the 12th with the bases loaded.
That set the stage for serious heroics by Almond. His homer was a no-doubter from the time it screamed off his bat, and Indians came pouring out of the dugout to greet him at the plate.
“It looked like we were blown out, but we never gave up, and that’s the sign of a great team,” Almond said. “This was a great team win. Now we’ve got to come back and do it again on Saturday.”
•••
NOTES: Today’s doubleheader at Newman Park starts at 1 p.m. … Russ Weiker and Sean Grant are the probable pitchers for the Indians. … Mars Hill’s Evan Rogers stole four bases.