Baseball 2016: Age-old question in majors — can Chicago Cubs do it? 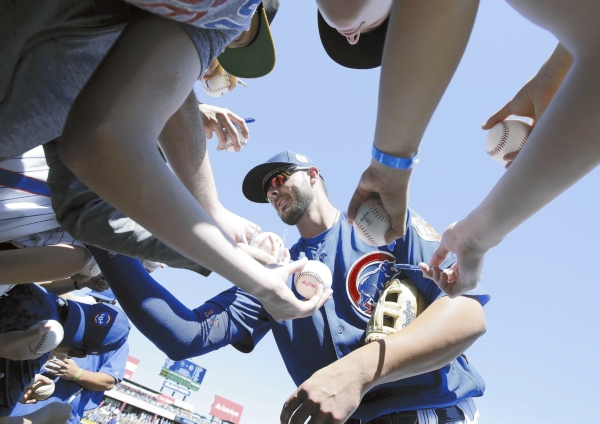 As a boy, he watched his beloved team play the very first World Series game at Wrigley Field. A few Octobers later, he was there to see Babe Ruth call his shot.

A lot changed over the years — a job in a different field, on another kind of bench — but retired Supreme Court Justice John Paul Stevens never lost faith in the Chicago Cubs.

Now 95 and older than the ivy at the Friendly Confines, Stevens offers an opinion on their title drought dating to 1908.

“I don’t think it’s a question of whether they’ll win a championship,” he told The Associated Press. “It’s whether I’ll still be here to see it.”

“They are close,” he said. “Will it happen soon enough?”

So let’s begin right there as Major League Baseball gets loosened up for opening day.

Bryce Harper, Mike Trout, Carlos Correa, Nolan Arenado and Noah Syndergaard among the young, bright stars all over the diamond.

Barry Bonds back in play, as the hitting coach for the Miami Marlins. Dusty Baker back in the dugout, managing the Washington Nationals.

A year after the Cubs, Houston, Toronto and Texas took huge strides to make the playoffs, fans are wondering who’s next.

AL Cy Young Award winner Dallas Keuchel saw what happened with the Astros. His first full year was 2013 and they lost 111 games.

MLB has made changes, too, on and off the field.

There’s the Chase Utley Rule that outlaws certain vicious takeout slides. But the old “neighborhood play” at second base is now reviewable, and many wonder whether that will put middle infielders in peril.

Some ballparks added extra netting to protect fans from foul balls that rocket into the seats. One of them is Kauffman Stadium, where the Kansas City Royals host the New York Mets on April 3, a tasty Series rematch on opening night.

The next day, Atlanta starts its 20th and final season at Turner Field before moving to the suburbs. Like a lot of teams, the Braves loaded up — the calories, that is.

Concession stands at the Ted are set to serve the “Burgerizza.” It’s a 20-ounce beef patty, smothered with five slices of cheddar cheese and bacon, between a pair of 8-inch pepperoni pizzas. All for only $26.

But pitchers Yu Darvish, Zack Wheeler, Homer Bailey and Alex Cobb seem to be recovering neatly from Tommy John surgery and are expected back soon enough.

So, how will things shake out?

San Francisco hopes its odd-even pattern holds after winning titles in 2010, 2012 and 2014. The Giants missed the playoffs last year, then got starters Jeff Samardzija and Cueto and outfielder Denard Span.

“This is as solid as I think we’ve been, and that’s saying a lot,” manager Bruce Bochy said.

The Royals apparently didn’t do enough to impress the stat-heads. A couple of numbers-based sites predicted Kansas City will finish below .500.

“They’re probably never going to pick us to win it, no matter what we do,” All-Star outfielder Lorenzo Cain said.

A season after getting swept by the pitching-rich Mets in the NL Championship Series, the Cubs acquired outfielder Jason Heyward, starter John Lackey and all-purpose player Ben Zobrist.

They joined Cy Young winner Jake Arrieta and young boppers Kris Bryant, Anthony Rizzo and Kyle Schwarber on a team clearly dressed for success. As manager Joe Maddon told his guys about clubhouse culture and couture: “If you think you look hot, you wear it.”

Whether that adds up to a Cubs crown, we’ll find out. It’s a supreme vacancy Justice Stevens wants to see filled.

A few years after he began listening to their games on radio, Stevens was 9 when he saw the Cubs drop the 1929 Series opener at Wrigley. He was back in ‘32 when the Bambino called his shot.

“Yes, it really happened,” he said. “My recollection is still fairly clear about him pointing to the center field scoreboard. Which he did.”

Stevens served more than 34 years on the Supreme Court and never moved away from rooting for his Cubbies.

“As a Cubs fan, you do a lot of parallel thinking,” he said. “You have the disappointment, and you always have hope.”