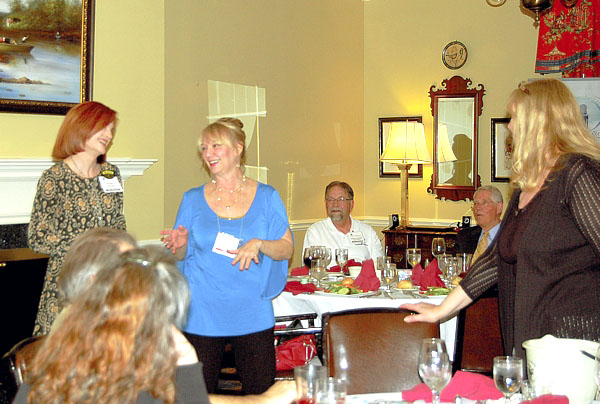 Amanda Raymond/Salisbury Post Rhonda Harrison (left) accepts her prizes for having the best marketing idea for the year. The Salisbury Sales and Marketing Executives Association held its Best Marketing Idea Competition event on Wednesday at the Country Club of Salisbury. To market The Pedal Factory, Harrison and her team offered a free bike for people to borrow. She won a $100 prize, an SSMEA paperweight and an SSMEA membership for the rest of the year.

A marketing idea from The Pedal Factory won the 2016 Best Marketing Idea Competition.

The Salisbury Sales and Marketing Executives Association (SSMEA) held its Best Marketing Idea Competition event at the Country Club of Salisbury on Wednesday.

Any business or organization in Salisbury and Rowan County, excluding SSMEA members, were able to submit entries.

The ideas were evaluated based on uniqueness, creativity and effectiveness.

Rhonda Harrison from The Pedal Factory, the night’s winner, told the story of how the organization offered a yellow bicycle for anyone to ride for free and bring back. The bike was returned three or four times before being stolen, but Harrison said the idea was worth it.

“I guess the point to this whole thing is to think outside the box. Just think big and bold,” she said.

Five other finalists presented their ideas during the event.

Dorothy-Jane Kozlowski from e-System South, LLC said art is the best marketing tool a business can use.

“It doesn’t matter what it is. You need to put your money and your time in having great art and it will make it go further,” she said.

She said one company was able to raise more than twice as more money for its fundraiser just by changing its postcards.

Sam Post from Coffee News said his marketing ideas revolved around social media, email blasts, advertising space, wide distribution and the “Little Man Contest,” where readers can try to find a little man in one of the advertisements for a chance at a prize.

“We’ve done trivia where a customer was actually on hold and when the person came back to talk to them, they wanted to be put back on hold again to hear what the answer was,” he said.

The members of SSMEA voted, and named Harrison the 2016 winner. Harrison was presented with a $100 prize, an SSMEA paperweight and an SSMEA membership for the rest of the year.

SSMEA is an organization that started in 1951 that supports sales executives and marketing professionals. According to its website, the association unites “professionals for the distinct purpose of improving techniques in sales and marketing management.”

Harrison said she was “surprised and honored” by her win.

“Just excited for the chance to come and speak about our nonprofit, and then the chance to share things that are out of the box,” she said. “We’re a fun group and we just try to never get locked into one idea.”

The organization also signed a card for Ralph Ketner, co-founder of Food Lion, who was supposed to attend the event and present a marketing idea, but was hospitalized last week.

Flowers for Suzanne: Trump proved gallant in defeat after…