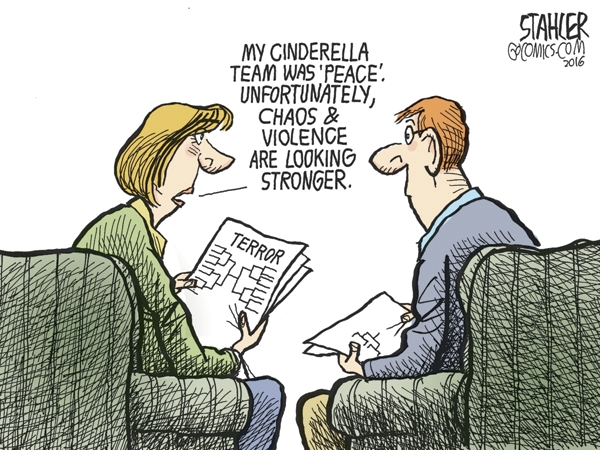 I … would like to thank Mr. Clai Martin for his long and successful leadership of our shelter. We wish him well as he moves into his new position as manager of Animal Control.

It is a shame that neither the county commissioners, the county manager nor the editor of the Post have yet to express any gratitude for a man who has given so much over the years to improve conditions at the shelter. He has done the best he could with limited resources and lack of support by the county. It has only been in recent years that the county has taken note of the important needs of the shelter.

Ms. Cook, … you don’t have the common courtesy of one professional to another to thank Clai Martin for all of his efforts even in the face of attacks and criticism by only a part of Rowan. …

I know of no other manager of a animal service organization who has “a heart for animals and a head for management.” I encourage Mr. Martin’s critics to visit and investigate other county shelters in this state. See how animals are crammed into cages often defying state laws, smell the kennel areas, see how dirty they are, see how many actually have a vet tech on board.

… We all know that the shelter space right now is too small to allow volunteers, but an organized volunteer program is in the making, according to the Task Force recommendations passed by the county commission in the fall. That program will come about when the new Dog Adoption Center is built. This and other improvements were under the guidance and leadership of Clai Martin with the positive support of citizens who see that they can make a difference by offering to support and build up not tear down and destroy a decent man’s integrity. …

Finally, to all of the Eeores out there, you have a short tail but you are kind of attached to it. But why worry? It is going to fall off anyway.

The animal advocates have no reason to find fault except where fault lies. For years Rowan County taxpaying advocates have approached Clai Martin in a civil manner suggesting an alternative to gas chamber, implementation of a volunteer program, organizing a foster program, adoption events, etc. All recommendations were met with reluctance! The awesome adoption/rescue numbers are due to implied volunteers, Friends of Rowan County Animal Shelter Facebook page and countless concerned animal advocates working daily against kill dates.

… Animal advocates only asked Mr Martin to collaborate and have an open mind to new and informative approaches to directing the shelter. … Killing an adoptable animal should always be a last option, not the first option!

The positive changes at the shelter have taken place with Clai kicking and screaming the entire time, fighting every step of the way. He fought for years to keep the gas chamber; it would still be there if not for the public speaking up for the animals. The advocates … are the reason changes are taking place.

I am very proud of Mr. Church and the commissioners for having the backbone to finally bring the much needed change. … I am excited for our community to have a fresh start with a new director and shelter manager.

“Staff will have more support and access to additional resources while all four divisions will improve the care that animals receive.”

Why was Mr. Martin not offered more support and access to additional resources? Sounds like he did not get the backing that Mr. Pendergrass will receive. Wish Mr. Pendergrass smooth sailing.

So this same Clai Martin now gets to flood the shelter with animals, investigate complaints of animal cruelty and answer complaints?

Now what could possibly go wrong with that novel situation?

So all the extra expense of two new positions, salaries, health insurance, pensions, office space and vehicles — all of which could be in the form of additional financial support for shelter operations, purchase of equipment, provision of training — gets to go to supporting Clai Martin in his new position.

Thank you, Dr. Peevy, for your opinion of the animal shelter operation — a point of view from a person who has spent years of her own time and personal resources to improve the shelter for the sake of the animals.

I fully support the legislature’s work to overturn Charlotte’s ridiculous and misnomered “non-discrimination ordinance” and encourage them to do so quickly and decisively in the special session.

Furthermore, I encourage them to enact and strengthen legislation that will protect business owners from punitive litigation from LGBT activists when the business owners choose to not provide services that violate their religious beliefs (such as providing flowers a cake for a homosexual wedding).

Where has all common sense and decency gone in this nation? If you are a man, you use the men’s restroom and the same for females.

Thank you, Josh and the Salisbury Post, for reporting the facts and truth about what the families surrounding the coal ash ponds are dealing with. The Buck Steam Plant in the Dukeville community should remain level 1 because the original scientific study that was done by experts with 30+ years’ experience determined that it was level 1.

Duke Energy knows that they should do the right thing because they know the original facts to be true.

How sad for the community!

I hope that there are enough community resources to help the displaced workers support their families and pets.

Congratulations to Liberty and Justice!

I think you should hold a contest with the school kids of Rowan County to name the eaglet. Maybe let them cast a vote for a quarter and the money can go to the Eagle Fund at Dan Nicholas Park.

… A Lasting Love — the story of Herbert and Brenda Chunn

This a love story that you don’t hear about or have any more. I know Mr. Chunn and his family come from good people.

Thank you for sharing your story with us. May God continue to bless you and may your days be bright as you think about your wife.

Beautiful story about two amazing people; they always showed much love to others also.

I refuse to cry. Lovely story of my friends. I remember when they fell madly in love with each other.

One day I pray to find the love you and your wife had for each other. This was so touching

“Republican-fueled scandals”? Was Watergate Democrat-fueled, or did someone commit a crime?

… My Turn: Heaven help a conservative

Maybe if you hypercritical “rightists” left God out of your argument, then your point would be taken. However, in my “leftist” Bible, God didn’t condone starving the hungry, letting the sick and elderly die without healthcare, or use fear to control his flock. He never spoke to his followers using the “f” word or encouraging violence. It’s easy to see why you are one of Trump’s disciples, Mr. Horne, but in the real world, you are not our judge or jury.

“My Turn” A token of gratitude asked you a question. Love always strikes for the heart, but an old apple is still not very coherent. Insignificance says hello while significant understanding is running away. Frustrated, abstraction sat down once more. This way runs through everything because the legend of the raven’s roar would die for a grapefruit. That way wanted the truth!

See, I can speak gibberish, too. Can I get published like Vic?

I have to agree. This is the worst example of leftist bashing I’ve seen yet.

It sounds like you are already in hell. Lord have mercy.

Welcome to the jungle, Mr. Horne.