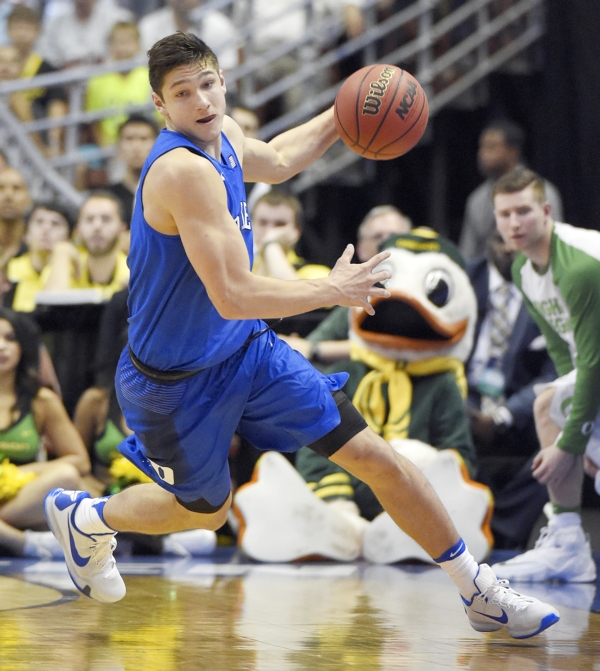 Duke guard Grayson Allen plays against Oregon during the second half of an NCAA college basketball game in the regional semifinals of the NCAA Tournament, Thursday, March 24, 2016, in Anaheim, Calif. (AP Photo/Mark J. Terrill)

ANAHEIM, Calif. (AP) — Dillon Brooks scored 22 points and Oregon advanced to the brink of its first Final Four in 77 years with an 82-68 victory over defending national champion Duke on Thursday night in the West Region semifinal of the NCAA Tournament.

Elgin Cook had 16 points and nine rebounds for the top-seeded Ducks (31-6), who will meet Oklahoma on Saturday. The second-seeded Sooners routed Texas A&M 77-63.

After a season-long rise in the Pacific Northwest, the Pac-12 champion Ducks emphatically arrived on the national stage with a strong second-half rally to beat the mighty Blue Devils (25-11) for the first time in school history.

No longer just a football school, Oregon is flying high after comfortably holding off Duke for one of the biggest wins in the program’s history.

Oregon was the champion of the first NCAA Tournament in 1939, but hasn’t been back to the Final Four since. The Ducks advanced to the Elite Eight for the first time since 2007 and the third time since 2002.

Brooks hit four 3-pointers to lead the Ducks, who also broke the school’s single-season wins record with their 31st. They’ve won 10 straight since mid-February while winning the Pac-12’s regular-season and tournament titles.

For all of coach Mike Krzyzewski’s incredible success, the Blue Devils are 0-5 in NCAA Tournament games in the Pacific time zone.

The Ducks took charge shortly after halftime, following a tight first half in which neither team made a big move. Oregon jumped out to an 11-point lead after back-to-back 3-pointers by Casey Benson and Chris Boucher, and they got the arena rocking with back-to-back fast-break dunks from Jordan Bell and Cook moments later.

Duke even broke out a zone defense in an attempt to slow down the Ducks, but their balanced lineup always found another scorer.

Ingram had an outstanding NCAA Tournament, scoring 69 points in Duke’s three games. If the skinny 18-year-old forward heads to the NBA as expected, he’s likely to be a top-three pick after showing incredible promise in his only season in Durham.

Duke: Marshall Plumlee got two early fouls and finished with six points in his final game.