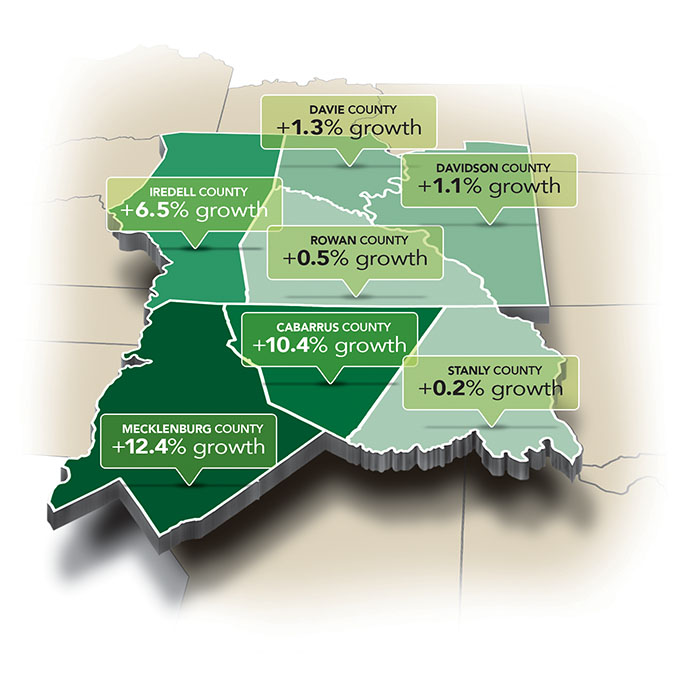 If Rowan County’s static or minuscule population growth is a problem, bringing in new business is the solution, say Rowan County leaders.

As nearly half of North Carolina’s counties lost population during the previous five years, Rowan County held its own, according to census statistics released Thursday. The census statistics show Rowan County as relatively stagnant or even growing slightly. The U.S. Census stats estimate Rowan’s population has grown by about 0.5 percent from 2010 to 2015. Meanwhile, neighbors Cabarrus and Iredell counties grew a notably sharper rates — 10.4 percent and 6.5 percent, respectively.

Brunswick County, near the coast, was the fastest growing in the state during the previous five years — 2010 to 2015 — according to the census statistics. Seven North Carolina counties were among the 100 fastest growing in the nation, including: Brunswick, Wake, Mecklenburg, Hoke, Harnett, Chatham and Durham. Wake County also joined Mecklenburg above the one-million-person population mark.

When asked about the results, county leaders — from realtors to elected officials — focused on the importance of economic development. Local real estate broker Dianne Greene exclusively listed jobs as a way for Rowan to gain additional residents. Existing tourism-focused business can be a factor in growth, said Convention and Visitors Bureau CEO James Meacham. Building additional infrastructure such as a county-owned water and sewer system can also help, said County Commissioner Craig Pierce.

Rowan Works Economic Development Director Robert Van Geons and Commissioners Chairman Greg Edds contend that growth is occurring. A product of a recently altered attitude, growth just hasn’t shown up yet in statistics, according to Van Geons and Edds.

“While the rest of the region has been running around the track, at least we’re moving again; and understanding what it takes not only to compete in the Charlotte region and East Coast region but also the global economy will be a key part of economic growth,” Edds said.

Local leaders have frequently referred to Rowan county as part of “the donut hole.” Surrounding areas have seen significant growth. However, Rowan has lagged behind.

Census estimates released Thursday confirm those statements. Mecklenburg and its surrounding counties saw growth rates of more than 3 percent over the previous five years. The Raleigh metropolitan area has also seen steep growth. Other metropolitan counties such as Guilford and Forsyth form a ring around Rowan and a few of its neighbors that have seen static or small rates of population growth.

Like Rowan, Davie, Davidson and Stanly counties saw a growth rate of about 1.2 percent or less. At points during the previous five years, the U.S. Census projected the quartet of counties dipped slightly in population.

The population growth contrasts with the most recent tourism and tax revenue numbers, which have been steadily climbing.

Meacham said tourism does not directly correlate with or directly impact population growth, but can be a factor when people have a positive experience. Growing the local tourism economy is one way the Convention and Visitors Bureau may boost Rowan’s population, he said.

“The CVB can continue to support growing industries such as wineries, breweries and agri-tourism,” Meacham said in an email. “These are evident with new projects such as New Sarum, Morgan Ridge Brewhouse and Eatery and expansions at Morgan Ridge Vineyards and Patterson Farms, just to name a few. Growing industries create new jobs, which creates new opportunities, which in time can support population growth.”

County leaders who spoke to the Salisbury Post said the relatively static growth isn’t a sign that people are leaving in Rowan. Greene said some people may be leaving Rowan, but a number of others are also moving in. A significant round of housing construction may boost growth rates, she said. More jobs, however, is the singular way to boost housing construction, she said.

“The ultimate goal is a larger tax base,” Pierce said. “Does that necessarily mean more people? It’s an easy way to add it.”

Pierce’s idea for growth focuses on a county-owned water and sewer system, which aims to provide incoming businesses with access to municipal water along the I-85 corridor.

“If those businesses and companies set up a plant and have jobs available, it will bring people here to work,” Pierce said. “The idea is you create the job and create the citizenry that will come with the jobs.”