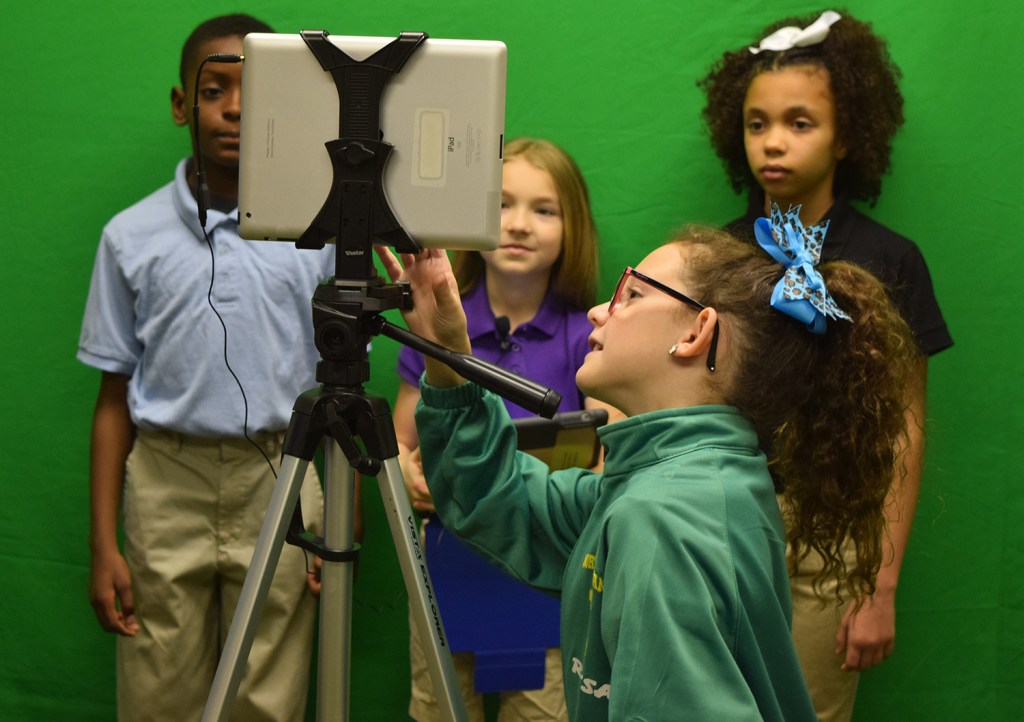 SPENCER — Every morning while the rest of the school settles in, North Rowan Elementary���s Media Tech Kids are hard at work. A few man the help desk, accepting broken, faulty or buggy iPads from teachers and students; and others help shelve books – North Rowan Elementary has been without a Media Coordinator for a few months, Technology Facilitator April McKee said, and the kids really help fill the gap.

But it’s in a small room off the Media Center that the magic happens. Here, a rotating group of four students work every day to film the morning news and announcements. The school has had a morning broadcast for years, but recently the program got a makeover.

“Our old broadcast was, the teachers had to turn on their VCS to channel four to watch our live broadcast,” third-grader Marissa Craig said.

Now, the broadcast content is the same, but the tech – and the distribution – has changed entirely.

The three announcers stand in front of a green screen read off the weather, lunch menu and special announcements. And recording the entire broadcast on an iPad means that the students can insert any background they want.

Malachi Harris, a fifth-grader, said that they use a news anchor desk most often, but sometimes they’ll use backdrops like the Lincoln Memorial. There are a few hang-ups, though.

“When you wear green, you glitch out,” Craig said.

It’s something the kids have learned to work around. And from start to finish, the morning broadcast is a show run entirely by the students. McKee, who students nicknamed ‘the genius,’ spent the first few weeks of the year teaching the group how to edit video and troubleshoot tech – and then she set them to work.

Students function as announcers, directors, film crew and editors. They film and edit broadcasts a day in advance, and when the next morning rolls around, they send it out – digitally. Instead of turning to channel four, teachers can flip on an Apple TV, or students can tune in on their laptops and iPads.

McKee said she started the program in 2014, but it really took off last fall.

More than 100 third through fifth grade students submitted applications in fall, and McKee picked 20 – two from each class. The students were split into fall and spring teams, with 10 working each semester. Participation is contingent on good grades and good behavior.

While her students credit McKee with coming up with the program, it’s not the only one around. McKee said other schools have similar broadcasts and use their technology in a similar way.

‘I think it’s started to catch on more and more,” McKee said.

But a few weeks ago, North Rowan Elementary’s tech kids had the opportunity to present at the 2016 conference for the North Carolina Technology In Education Society in Raleigh.

“I think I was more nervous than they were, and I wasn’t even the one participating,” McKee said.

The 20 students submitted essays or videos on why they wanted to attend the conference, and McKee picked 10. She also created a GoFundMe page to raise money for team shirts, lunches, gas and other expenses. The group raised $600 in less than 12 hours.

“It made me feel good, but I really wanted them to see that the community really loves and supports them and what they’re doing,” McKee said.

Educators from across the state attended the conference, where the tech kids talked about how they produced their morning broadcast.

“And no one would get mad at you and tell you to be quiet,” McNeil added.

The kids invited conference guests to be on their broadcast, and spent a lot of time exploring the booths and tables, interactive technology and robotics.

McKee plans to continue the tech kids program next year, but it will be a new crop of students. It’s a one-year program, Craig said, so other kids will have an opportunity to do it next year, and the year after that.