Thousands of courthouse files to be moved for asbestos work 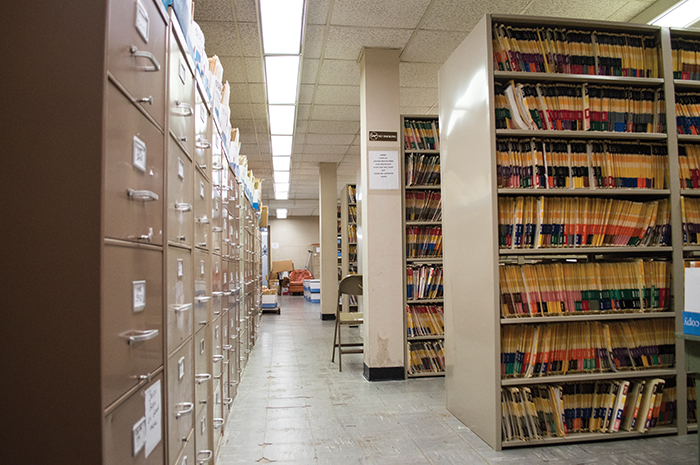 Thousands of Rowan County court files will be displaced, some permanently, as part of a project to replace floor tiles containing asbestos.

County officials for years have known floor tiles in the basement of the Rowan County Courthouse — first built in 1912 — contained asbestos. Only recently have the floor tiles become a concern.

Flooding in the basement steadily degraded floor tiles. Many tiles are chipped, broken or missing entirely. Portions of the floor are also raised because of water damage.

“The building, being as old as it is, had some drainage problems,” said Rowan County Facilities Director Don Bringle. “Moisture in the basement caused portions of the floor to raise up. It has created an unsafe situation.”

Rowan County commissioners this week approved a project to repair the basement floor, which will come at a cost of $61,617.86. Restoration Plus will complete the work in multiple steps. Floors of individual rooms will be completed at different times. Before rooms are renovated, court files will be moved, said Rowan County Clerk of Superior Court Jeff Barger.

“The rooms will basically have to be empty before work can be done,” Barger said.

Work is expected to start in early April. It will take multiple weeks to replace floor tiles in every room, he said. The largest portion of work will be related to moving court files, Bringle said.

The basement mostly contains old or completed court case files, which are stored in various methods and take up several rooms. Some are kept on open shelves that stretch to the ceiling. Others are kept in filing cabinets. A number of files are also in boxes placed on top of wooden pallets to protect documents from water problems.

Some files have previously been damaged by flooding in the basement, Barger said. Most flooding problems, however, have been fixed, he said.

Barger used a book containing files from the 1860s as an example of what would be permanently moved out of the Rowan County Courthouse. In one of the court cases listed in the book, the total cost of a judgement against a defendant was $21.60.

Court files not moved to the state archives and not required to be kept may be destroyed, Barger said.

He said courthouse employees occasionally access court files located in the basement. The project shouldn’t significantly affect the ability of employees to access the files, he said.

Once tiles are replaced, Barger said, the files will have to be completely reorganized.

When asked, local architect Bill Burgin said asbestos-laden floor tiles are relatively common in old buildings. Asbestos can also be found in wall panels or as insulation on pipes, Burgin said. He said asbestos isn’t a concern unless it’s disturbed.

“You can generally avoid dealing with it as long as it’s in good condition,” Burgin said about asbestos. “Once it begins to break up and come up, it can become a hazard.”

Asbestos is considered a carcinogen. Most people, however, do not become ill from exposure, according to the National Cancer Institute.

“Everyone is exposed to asbestos at some time during their life,” the center states on its website. “Low levels of asbestos are present in the air, water and soil. … People who become ill from asbestos are usually those who are exposed to it on a regular basis, most often in a job where they work directly with the material or through substantial environmental contact.”