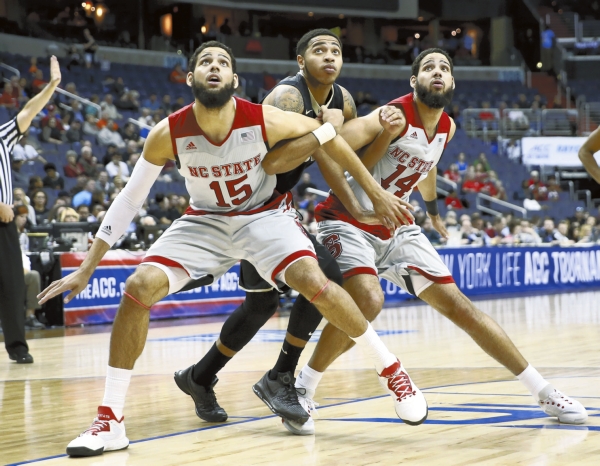 AP Photo/Alex Brandon, File ... Twins Cody Martin (15), left, and Caleb Martin (14), right, are transferring from N.C. State, it was announced Thursday by head coach Mark Gottfried. The twins, who played at Davie County High School, are shown above during their ACC Tournament win over Wake Forest.

The Martins were standouts for Davie County High for three seasons before transferring to Oak Hill Academy for their senior year.
Davie was 65-20 in the three seasons the Martins played for coach Mike Absher, from 2010-11 to 2012-13.
As juniors, the twins paced Davie to a 21-6 record, with Caleb averaging 18.6 points per game and Cody scoring at a 14.9 clip. Davie won the Sam Moir Christmas Classic that season.
The Martins’ sophomore year, they teamed with East-West all-stars Nate Jones and Shannon Dillard on a powerhouse club. Davie’s War Eagles went 23-7, losing to Kennedy Meeks and West Charlotte, 73-59, in the 4A West Regional final.

Coach Mark Gottfried announced their decision Thursday following what he said was “a series of honest, thoughtful and somewhat surprising conversations” they’ve had since the season ended.

The brothers who play both guard and forward ranked fourth and fifth in scoring on the team in scoring, with Caleb averaging 11.5 points and Cody scoring 6.0 points per game. They combined to start 35 games as sophomores this season.

Caleb thanked North Carolina State for the opportunity but says “we think it is best for us to move on.”

The announcement came two days after Anthony “Cat” Barber said he would skip his final season to pursue an NBA career. Barber led the Atlantic Coast Conference with a 23.5-point average. Teammate Abdul-Malik Abu also will enter his name in the NBA Draft pool but will not hire an agent, reserving the option to return to school.

Barber’s decision was expected. The Martin twins’ choice was a surprise.

Gottfried said he and the Martins had discussions in the two weeks since the season ended with a second-round loss to Duke in the Atlantic Coast Conference Tournament.

“While I don’t share all of their views, I have certainly come to understand and respect the unique dynamic and special bond that exists between identical twins, especially when they play the same sport for the same team,” Gottfried said. “I enjoyed coaching them over the past two years.”

The Wolfpack also have guard Terry Henderson, a transfer from West Virginia who injured an ankle during the opener and missed the rest of the 2015-16 season.