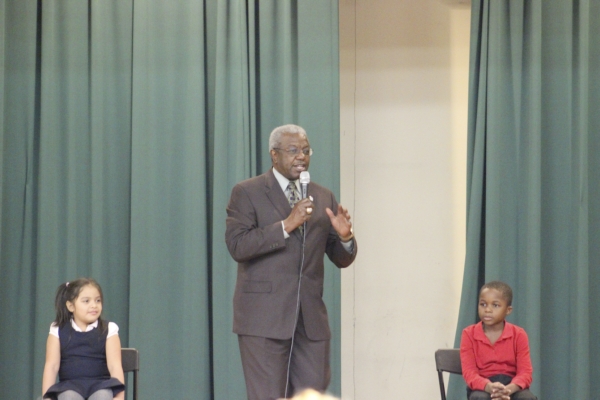 The event was held on Feb. 29 in the school’s gymnasium and was quite a success – especially when Livingstone’s choir performed “Clap Praise,” a song that requires concentration because of its variety of syncopated clapping rhythms.

The excitement on the faces of the Isenberg students couldn’t be contained as they tried to keep up with the choir members as Director Dr. DaVaughn L. Miller had instructed.

But make no mistake about it. The program was serious in its intent and in the messages delivered by Jenkins and the students themselves.

For example, several male students walked across the stage to a makeshift Woolworth’s lunch counter, where a teacher portraying a waitress stood ready for them.

“I want some fries,” one student told the waitress. “I can’t serve you fries. You’ll have to go somewhere else,” she replied.

Another student asked for pizza and received a similar response, while another asked for eggs only to hear “no.”

Just before the Isenberg students exited the lunch counter, they proclaimed, “We are the A&T Four” to loud applause.

Another critical moment in black history was re-enacted when first grader Kennedy Johnson said, “My grandfather used to tell me, ‘Rosa, you’re just as good as anybody else.’ ” Dressed in a pink coat and wearing glasses, Kennedy portrayed NAACP secretary Rosa Parks, who became a Civil Rights icon after refusing to give up her bus seat to a white man on Dec. 1, 1955, spearheading the Montgomery Bus Boycott.

Before performing “Clap Praise,” Livingstone’s choir sang “Lift Ev’ry Voice and Sing.” Another tune heard during the celebration was “Glory,” the Oscar-winning song by John Legend and Common from the “Selma” soundtrack.

Fifth grader Michelle Cartwright read about the Coretta Scott King Book Awards, designed to commemorate the life and works of her husband, slain civil rights leader Dr. Martin Luther King, Jr., and to honor her for continuing his legacy of peace. Michelle also introduced Jenkins, the keynote speaker and her grandfather.

“I’m so happy to be here with you today,” Jenkins began. “This is so beautiful.”

After entertaining their answers, Jenkins told the students they must learn history. “If you don’t know what’s been done in the past, you won’t be able to appreciate where you are today, and you won’t know where you’re going tomorrow,” he said. “Black History Month is about teaching everyone of all races what black people did to help make this country great. It’s all about education.”

Jenkins discussed slave laws before asking for a definition of segregation. Again, numerous students raised their hands for a shot at answering.

“Segregation means that white people were separated from blacks,” said Skylar. Another student said it meant “that black people had to give up their seats to white people.”

After hearing their answers, Jenkins had two students sit in chairs on stage to illustrate segregation. While making his point, he discussed the difference in the quality of textbooks used by white kids and black kids.

“Here’s what I’m telling you,” Jenkins said. “You need to get all of the education you can because if you get all of the education that you can, there’s no limit to what you can do or where you can go. Even though I didn’t go to an integrated school until I got out of college, guess what? I earned a Ph.D. from Purdue University in Indiana and went on to teach school before becoming a college president.”

“I thought the event was just wonderful,” said Assistant Principal Nita Jarvis. “It was inspiring. The skit at the Woolworth’s lunch counter was great, and the dance was the most beautiful representation of Rosa Parks that I’ve ever seen. I always enjoy whenever Livingstone College participates in our events. Their choir is just lovely to hear”