Flowers for Suzanne: Trump proved gallant in defeat after losing to spunky actress 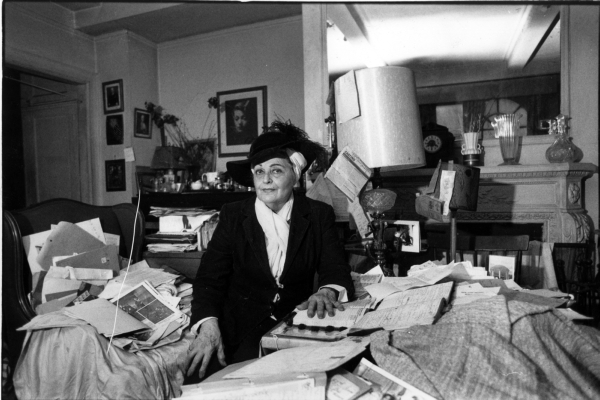 This photograph of Suzanne Blackmer was taken in 1987 in her New York apartment, the one from which Donald Trump unsuccessfully tried to have her removed. New York Newsday/Viorel Florescu

SALISBURY — Jonathan Blackmer traveled to Chestnut Hill Cemetery Monday and placed fresh flowers at the gravesite of his mother, Suzanne. It would have been her 104th birthday, a day Jonathan always associates with the start of spring.

The tall stone marker for actors Sidney and Suzanne Blackmer includes the traditional command of a stage manager in the theater: “Quiet please. The curtain is up.” Before Sidney had died of cancer in 1973, he had told Jonathan it was the inscription he wanted engraved on his headstone.

It’s fitting, of course, for both Sidney and Suzanne.

The flowers Jonathan placed at the foot of the tombstone made him think of the long war his mother once waged with Donald Trump — yes, that Donald Trump, the man running for the Republican nomination for president.

After more than a decade of litigation and trying to force Suzanne Blackmer out of her rent-controlled apartment at 100 Central Park South — an address that was as ritzy as it sounds — Suzanne triumphed and was able to stay.

Jonathan remembers how Trump’s people “dragged her into court” at every opportunity and how often she stood up to them alone.

More amazing than her victory was how Suzanne forgave Trump after it was all over and how Trump showed his respect for her. On every birthday until Suzanne’s death in 2004, Trump sent her flowers and a card.

“He was magnanimous in defeat,” Jonathan Blackmer says. “I think it does speak well of him.”

Blackmer says he’s looking for the proof in past newspaper articles, but he is sure his mother was once quoted as saying Trump was a man of vision and she thought he could or should run for president.

“She spoke very highly of him,” Blackmer says. “… I’m sure she said something looking toward his future, and she bore him no ill will.”

Suzanne Kaaren Blackmer was a Ziegfeld Follies girl, who would go on to appear in more than 66 movies and in several stage productions. Her beautiful legs, described as the “Toast of Broadway,” were once insured for $1 million.

She married Sidney Blackmer in Hollywood in 1943. They first rented the Central Park South apartment in 1945 and often split their time between New York and Sidney’s hometown of Salisbury, though they considered Salisbury home. It’s where they mostly raised their two boys, Brewster and Jonathan.

The couple were true darlings of Salisbury, and everyone identified them with their stately home at 112 S. Fulton St.

But Suzanne ran into bad luck after Sidney’s death in 1973. The couple’s wealth had been decimated by bad investments and Sidney’s fight against cancer. Suzanne  found it difficult to maintain her huge, historic home, and things became even more desperate when a 1984 fire — not covered by insurance, because it had lapsed — seriously damaged the home.

Suzanne fought city government and neighbors who wanted the house torn down. She lived in the big garage in back with much of her memorabilia, while her pipes froze in the winter, forcing her to shower at the YMCA.

Suzanne eventually returned to the New York apartment, which had three big windows looking onto Central Park, with Tiffany’s just around the corner. She was on the third floor of a 15-floor building.

Based on her age and income and because of New York rent controls, Suzanne Blackmer paid only $203.59 a month for the two-bedroom apartment.

Her income at the time was less than $10,000 a year, representing the money she received from Social Security, a small Actors’ Guild pension and even some occasional work as an actress.

Trump entered the picture after he bought her building and its 86 flats. One reason he purchased the property at a bargain price was that many of the building’s tenants were in rent-control situations, so it was unprofitable for the former owners.

Other similar apartments were renting for $5,000 a month. Trump also knew he could sell them for $1 million each as condominiums, so it was his argument Suzanne should pay fair market value or get out.

His lawyers first asked the Department of Housing three times to evict Blackmer, arguing her real home was back in Salisbury. They lost three times, appealed to the courts and lost again.

But by December 1986, the Trump lawyers had persuaded officials her real home was in North Carolina, even with the fire and despite her house’s unlivable condition. So Blackmer found an attorney, Marc Finklestein, a law professor at the Brooklyn Law School and director of the Brooklyn Legal Services Office for Senior Citizens.

At one point in 1987, a law enforcement officer came to her apartment door with a piece of paper, giving her 72 hours to move out. Her attorney successfully fended off that eviction attempt.

“She now spends almost all her time, talking on the phone about Donald Trump,” Davies said of Suzanne, “writing notes to herself about him, losing them, and loathing him, really deeply despising him.”

In 1998, an appellate court ruled that Trump could turn the apartments into condos and sell them — Suzanne Blackmer’s apartment was assessed at $750,000 — but Suzanne and other rent-control tenants could stay if they wanted with the New York rent controls still in effect.

In January 2004, just eight months before his mother’s death, Jonathan, an attorney in Virginia, gave the Post this report on how things were going between his mother and Trump:

“She pays her rent on time, and Trump has been magnificent. He and his organization have bent over backwards since the end of the lawsuit. He’s a man of honor and integrity, and he complied with the court order and continues to do so.”

Today, as his mother did years ago, Blackmer shows a tremendous capacity for forgiveness toward Trump and the people who worked for him. There were times, he recalls, when they made it difficult for his mother in her apartment by cutting off the water and power — and blaming it on the renovations going on elsewhere.

There also was some harassment by the doorman and building superintendent.

But Jonathan doesn’t think Trump directed the hard tactics or was ever malicious toward his mother. “He’s a businessman, and that’s what they had to do,” Blackmer says.

Suzanne Blackmer’s own words from 1998, after her victory, demonstrate how she had personally buried the hatchet with Trump. In a New York Times story, Suzanne said of her adversary, “He’s handsome. Energetic. Ambitious. And not just for the accumulation of wealth as much for the spirit of development. He’s wonderful. I wish him the best.”

Trump read those words and wrote her a note.

It said, ” … your wonderful statements about me … sounds to me that you know me better than I know myself. I really do have a ‘spirit of development,’ but nobody has ever expressed it as beautifully as you have.”

Blackmer told the Post in 2000 she loved that note and kept it. She stressed her fight with Trump was in the past.

“Anything unpleasant must be forgotten,” she added. “You must carry on. We have wars. Look what’s happening now. But we’re trying to have peace. Life goes on. This is 2000.”

The Blackmer House in Salisbury was saved. Jonathan ended up selling it to Historic Salisbury Foundation, which in turn sold it to Glenn and Beth Dixon. The Dixons finished a complete restoration last year.

Suzanne Blackmer continued living in her New York apartment until she contracted pneumonia. Jonathan made sure she was hospitalized, and when she began getting better, he moved her to the Lillian Booth Home of the Actors’ Fund of America in Englewood, N.J., for rehabilitation.

Suzanne Blackmer never made it back to her apartment. She died Aug. 27, 2004, at age 92 and was buried with her husband in Salisbury.

Jonathan Blackmer said he spent a year cleaning out his mother’s New York apartment, then mailed the keys to Trump — or Trump’s people.

The curtain came down on the story of a feisty little actress and the billionaire developer.

Winning can be a complicated thing.