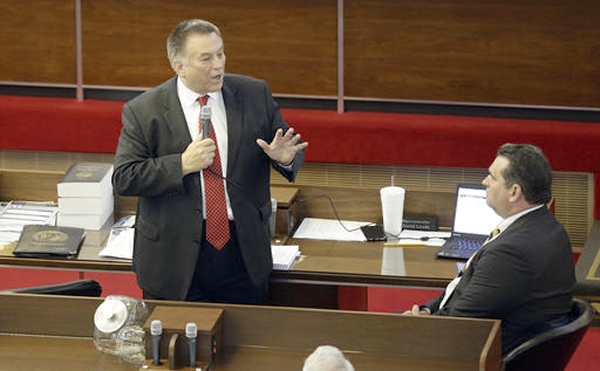 Rep. Paul Stam, R-Wake, speaks on the House floor as North Carolina lawmakers gather for a special session Wednesday to consider stopping a new Charlotte ordinance that gives protections to transgender people to use the restroom of their gender identity. AP photo

This week’s special session of the General Assembly was called primarily to address a new ordinance in Charlotte, due to go into effect April 1. While the primary focus was the so-called “bathroom ordinance,” there were other important issues that surfaced.

Let’s begin by acknowledging that municipal government in North Carolina is a creation of and governed by the state. Throughout modern history our legislature has provided oversight with a “light hand,” insisting that local units of government follow the state Constitution, abide by state laws and avoid expressly prohibited actions. That philosophy has worked well in the past, but our current legislature increasingly comes across like “Big Brother.”

The admirable thrust of Charlotte’s ordinance was to ensure that businesses and others would not discriminate against a person because of his or her sexual identity or preference, but they crossed the line with a provision allowing transgendered people to use public bathrooms that correspond to their gender identity.

Can we agree that discrimination in any form is wrong? However, as an older, slightly overweight, balding, left-handed, white man I can testify that prejudice occurs. You probably can too. What we must guarantee is that no one has his or her rights denied, while also being careful to ensure not that one person’s rights do not violate another’s.

We might question why parts of Charlotte’s ordinance were necessary but do acknowledge that locally elected officials should, after spirited and full debate, decide local issues. Drilling deeper raises further questions. The safety concern is a red herring, using scare tactics to conjure images where transgendered persons violate someone’s privacy or commit sexual crimes. Just being transgendered does not equate to being a predator. Sexual predators come in all shapes, races and genders. Whether they can or cannot share bathrooms neither promotes nor prevents sexual crimes. There are many other cities across the nation with similar ordinances. Few, if any, have reported instances of safety issues.

The larger issue to us is privacy. Nobody wants to wait in lines, so we demand more toilets, more showers and more lockers. I admit sometimes feeling awkward standing next to another man using a urinal and totally abhor shared locker rooms with joint showers. Women tell me they have the same concerns. It would be even more disconcerting with someone of a different sex. That’s not a matter of discrimination but my own desire for privacy.

Regarding the debate on the minimum wage, we think lawmakers are on firm ground. State law establishes a minimum wage and does not expressly grant municipalities the right to set it higher or lower than the law. This is an instance of local government usurping state law.

The ultimate issue is government intrusion. North Carolinians have long deplored the practice of the federal government intruding into state affairs, but in recent years our legislature has done exactly the same thing by meddling in local affairs that by right should be local issues. Similarly, there can be no doubt that local governments are sometimes guilty of intrusion into personal affairs.

In summary, discrimination is not only illegal but also wrong. So, too, is undue intrusion by government at any level. Safety and privacy are vitally important. Those are our takeaways from this week’s special legislative session.