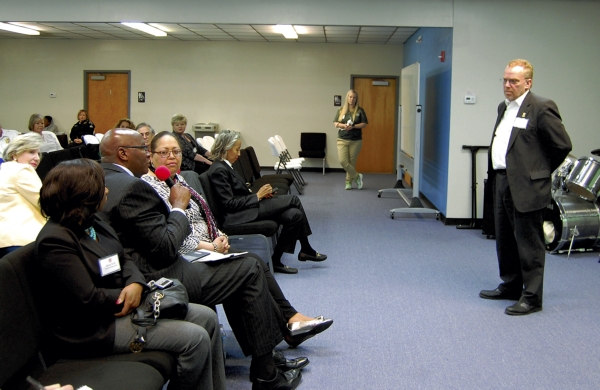 A small gathering of community members talked about opportunities for the city’s youth at the second Community Conversations event on Tuesday.

The event was held at Father’s House of Glory and facilitated by Salisbury Communications Director Linda McElroy, while City Manager Lane Bailey answered and directed questions to the right city employees.

The event was created to have residents talk with community leaders about ideas and concerns regarding their neighborhoods. Residents were also able to receive information about city services.

Before the question and answer part of the event, Bailey presented information about the city. He said the current challenges the city faces are revitalization of the West End community, improving the kindergarten through 12th grade education system, developing the city’s downtown area, finding a new police chief and working on the city budget.

“As churches, as pastors, what is it that we can do to better assist a lot of the things that the city wants to accomplish?”

Kent Winrich, director of broadband and infrastructure services, said he wants to work with churches to establish hotspots for after-school or weekend programs.

“It’s going to benefit you by getting youth into your church and the youth will benefit from learning about your church and services that you do offer, and plus they will have the access to Internet they may not have at home,” he said.

Bailey said he will hold a staff meeting to talk about other ways churches can help.

Smyre asked if there were any opportunities for young adults with the city as far as shadowing or internships.

Multiple city employees talked about the internships available in different departments, including within the fire and police departments.

Fire Chief Bob Parnell talked about a program called the Campus Emergency Response Team that trains local students for emergency situations. Parnell said within that program, there are about six interns who are learning about emergency services at the department.

“After you earn your degree, you are then hirable, because we provide training, we provide books, we provide certification,” he said.

“It’s a matter of reaching out,” he said.

Gloria Blaire, chief of police at Livingstone College and a member of Father’s House of Glory, asked about activities available for youth from the ages of 16 to 18.

Nick Aceves, parks and recreation director, said though they were not focusing on that age group presently, they can look into providing a structured program for that age group that focuses on something other than athletics.

“We do not seek only the top of the top students from the high schools,” she said. “You only have to have a C average to qualify.”

Ruth Kennerly, human resources director, said the city is open to speaking to children about career development and opportunities.

Lou Manning, president of the Park Avenue Redevelopment Corp., reminded everyone that the process is slow-going but progress can be made.

“You have to be patient enough to give things a chance to work. It just doesn’t happen overnight, so don’t expect any of these things to be miracles because they’re just not there. It takes a lot of hard work by a lot of people,” he said.

After the meeting, Manning said the event was especially helpful for getting good information about youth activities.

“I thought it was great. It was great for information purposes,” he said.

Attendee Subrina Hough said the event was important to hold, even if it did not draw a big crowd.

At the end of the event, Smyre said he was sure good things would come out of the conversations.

The third Community Conversations will happen during the early summer in another neighborhood in the city.