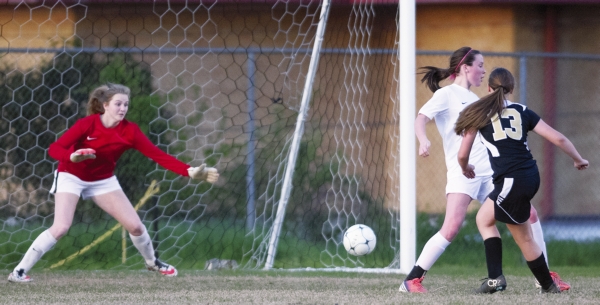 SALISBURY — Just when the Salisbury girls soccer team thought everything was in order Wednesday night, disorder prevailed at Ludwig Stadium.

“Give credit where credit is due,” coach Matt Parrish said after Salisbury (7-1-1 overall) suffered its first loss. “They were relentless with pressure, but boy did we help. We were feeding the beast, over and over again, instead of playing responsibly.”

“We just stopped playing to win,” senior defender Kathryn Rusher said after Salisbury completed its third match in three nights. “And played more so not to lose. We were more worried about what was going to happen instead of stepping up and playing the ball.”

Teammate Julia Honeycutt was equally irritated. “Everything we normally do to help us be successful,” she said, “we stopped doing at the end. It’s frustrating.”

Salisbury spent much of the night trying to connect all the dots. It pushed far too many passes toward the center of the field and didn’t have a legitimate shot-on-goal for nine minutes.

“Where did we kick it?” Parrish asked. “Right into the teeth of their defense.”

Camouflaged in the loss was the picture-perfect goal Salisbury’s Katie Bullock scored late in the first half. She took a feed from Honeycutt, navigated her way in front of the cage and pumped a 10-yard shot past East Davidson keeper Kegan Watford with 13:14 on the clock.

“It’s the same thing Parrish has been telling us to do all season,” Bullock said. “Take the ball to the goal. It’s another one of the things we lost sight of in the second half.”

Salisbury’s defense — anchored by Rusher, Amelia Steinman, Nellie Brown, Bethanie Stauffer and goalkeeper Juliana Anderson — was thoroughly tested in the second half. The Golden Eagles peppered nine shots at the Hornets’ cage and nearly tied the score with 10 minutes to play. Only a highlight-reel save by Anderson — she deflected a doorstep shot over the crossbar — kept Salisbury ahead.

“It was off a corner (kick) and we should have stepped out and pressured the girl better,” said Rusher. “We were lucky that Juliana read it. But instead of lighting a fire under us, that play just made us nervous.”

Salisbury was even more rattled after East Davidson senior Madi Hallman found a seam and snuck behind Salisbury’s defense, then stuffed a close-range shot past Anderson. A recent arrival from East’s basketball team and a Catawba signee in that sport, it was Hallman’s fifth goal in three matches.

“She was one v. one with their keeper,” said winning coach Paul McIntire. “And she was able to touch the ball just right and put it in the back of the net. That’s Madi. She’s a go-getter.”

The decisive goal came about three-and-a-half minutes later. This time East’s Gabby Orman confiscated a loose ball in front and blasted a low shot past Anderson, setting off a festive celebration.

“Nobody on our side was talking,” Honeycutt said. “And that’s how the ball got through. Communication is key in soccer.”

“That’s what made this so huge,” McIntire said. “To come to Salisbury, where Matt has such a great program, and win, this keeps us going forward.”

And keeps the Hornets running in place. “I think we were afraid to lose,” Parrish said. “And so we started giving up space and panicking. We were on our heels the whole time.”