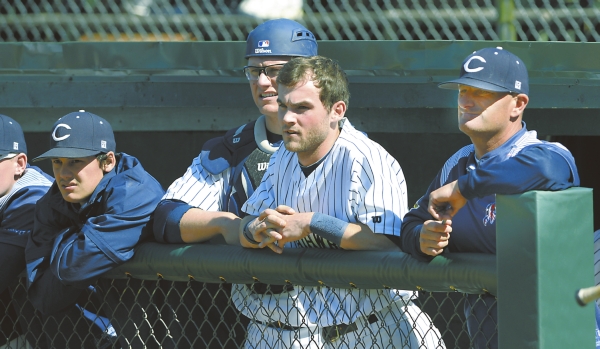 SALISBURY — Just another night at Newman Park, where visiting Pfeiffer walloped three homers and lost by nine runs.
It took 3 hours, 17 minutes to put Catawba’s 15-6 victory in the books. It was win No. 700 at the helm of the Indians for coach Jim Gantt, whose first season was in 1997.
“Well, 700 wins just means I’ve had longevity,” Gantt said. “Longevity and a lot of good players and good coaches.”
One of the best hitters Gantt has ever had was mashing again on Wednesday. In his two-year career at Catawba, Will Albertson is 160-for-355. That’s a .451 batting average. Albertson has driven in 124 runs in 90 games.
Albertson had a pair of two-run doubles against Pfeiffer. The two-out double that he produced in the fourth inning that bumped a 3-1 Catawba lead to 5-1 was the key hit of the marathon.
With a lefty on the mound and Catawba’s lefty-swinging Malachi Hanes in the on-deck circle, Albertson had to expect an intentional walk, but Pfeiffer (11-19) didn’t have a whole lot to lose. After a long mound meeting, the Falcons elected to pitch to Albertson.
“They tried to get a pitch in on me, and I didn’t really hit the ball all that well,” Albertson said. “But I was able to keep it fair and it fell down the left-field line for two runs.”
Gantt tipped his cap to Pfeiffer coach Dusty Blake for challenging Albertson.
“A lot of people have been walking Will in the second and third inning,” Gantt said. “Give Pfeiffer credit. They weren’t afraid to play the game, and they pitched to him. They tried to figure out a way to get him out.”
That double provided breathing room for Catawba starter and winner Connor Johnson, who turned in his second straight strong outing. Johnson held the Falcons to a single run in his five innings — a solo homer to left-center by former South Rowan star Dylan Goodman.
Johnson, who threw 74 pitches and struck out three, helped himself with a nice pickoff move and he got help from leaping shortstop Jeremy Simpson and high-flying center fielder Luke Setzer. Both snagged balls that were smoked.
“That’s two great starts in a row for Connor,” first baseman Chance Bowden said. “He was locating and changing speeds. It’s huge for our team to have him back on track.”
It was Bowden who started the offensive onslaught for Catawba. His two-run homer in the second wiped out Pfeiffer’s early 1-0 lead. Bryce Fowler walked with the bases loaded in the third to make it 3-1, and Albertson’s clutch double in the fourth made it 5-1.
“We got timely hits today,” Bowden said. “Everyone was squaring it up.”
The Indians (17-11) did some serious squaring up and batted forever in an eight-run fifth that made it a 13-1 laugher. Fowler’s RBI single started the rampage. It was 10-1 after Albertson sent a two-run double screaming toward the center-field wall against side-arming righty Hunter Jobe.
“I got the barrel on that one, and it was good to stay on a ball and drive it to center like that,” Albertson said. “I’ve been getting my hits, but I’ve been pressing some and trying to drive some balls that I can’t drive. It’s helped that we’ve got a lot of guys hitting now, especially Malachi Hanes behind me. He’s that lefty power bat that we’ve needed. He’s scary.”
When Albertson talks about “not driving balls,” you have to keep it in perspective. He’s batting .414 this season. He just hasn’t been quite as devastating as he was in 2015 when he led the nation with a .467 average. He also walks and gets hit by pitches so often, that his on-base percentage is a ridiculous .529.
Hanes destroyed a pitch for a three-run homer as the fifth inning continued. He hit it high, and he hit it far to right. It was 13-1 when the ball finally landed.
“You should see what Hanes does in batting practice,” Bowden said. “Just unbelievable.”
Pfeiffer made things respectable in the eighth as Zach Scudder smacked a three-run homer and Ryan Stanley added a two-run shot.
Catawba tacked on two more runs in the eighth and finished with 15 hits. Bryan Blanton pitched a calm ninth to close things out.
“We’re getting better offensively and defensively,” Gantt said. “And this team always battles.”
Gantt’s teams have battled well enough over the years to put up 700 wins.
“Coach’s 700th win, it was really cool to be part of it,” Bowden said. “I was proud to be part of something that big.”
•••
NOTES: Catawba is batting .296 with 32 homers. … Russ Weiker pitched well in the sixth and seventh as he tuned up for a Saturday start. … While Catawba’s biggest issue has been starting pitching, things are looking up with Johnson’s return to form and Sean Grant’s comeback from elbow concerns. Grant is expected to start a game on Saturday. Catawba hosts Mars Hill on Friday and Saturday in a conference series.