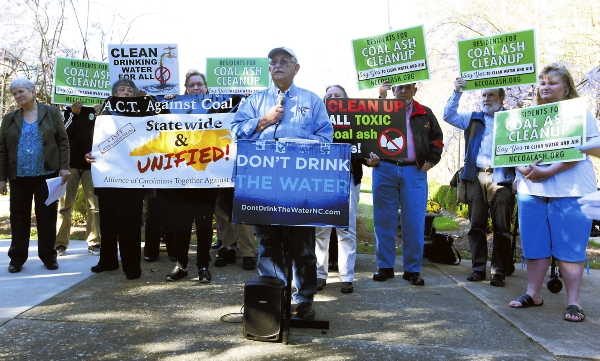 About three dozen people spoke Tuesday at Catawba College during a public hearing about coal ash at Buck Steam Station. Many of the speakers accused McCrory and his “political appointees” of altering priority ratings after Department of Environmental Quality staff initially recommended coal ash ponds at Buck be labeled high priority.

“There must have been a miracle when the risk assessment moved,” joked Yadkin Riverkeeper Executive Director Terri Pratt.

Mocking state officials, Pratt joked, “By God, it must be low.”

Pratt was joined by speakers from other environmental advocacy organizations, Rowan residents, two local pastors and North Carolinians from other counties.

“This whole time Governor McCrory has not said one thing to any of us,” Graham said. “I’ve called McCrory every single day. … They don’t want public input.”

“I appreciate that you made the recommendation,” said Donna Lisenby, who works for the Waterkeeper Alliance. “You guys got it right the first time.”

Lisenby encouraged the DEQ staff members present at Tuesday’s meeting to use scientific evidence presented to convince politicians to rate Buck Steam Station a high-priority site. She presented a study from a professor at East Carolina University that questioned whether Duke Energy’s research took into account the force of nearby private wells sucking groundwater. The company has provided data to state officials that has been used to determine priority ratings.

After Tuesday’s meeting, Duke Energy spokeswoman Erin Culbert in an email responded to Lisenby’s statement by saying, “After testing many wells near the ash basins, there are no elevated boron or other substances that would indicate potential coal ash influence.”

Boron is seen as an indicator of whether coal ash contamination exists.

A number of Rowan residents and residents from other counties spoke about political interference in a process that Duke Energy and environmental advocates both said requires thorough scientific research.

“An important focus in this work is making sure all closure plans protect groundwater and our comprehensive assessments will inform our plans,” said Duke Energy Government Community Relations Manager Randy Welch during Tuesday’s hearing. “If the science says we should excavate the material, then we will look first to whether we can direct that to an on-site, lined landfill rather than transporting it to a new location off site.”

About 5 million tons of coal ash currently sits in Buck Steam Station’s coal ash ponds, according to Duke Energy. The coal ash initially stoked fears from locals about whether well water is safe. When the state legislature passed the 2014 Coal Ash Management Act, it resulted in testing across the state that showed hundreds of wells, including dozens in Dukeville, contained unsafe water.

Less than one week ago, most neighbors of coal ash ponds across North Carolina received letters saying their well water was safe to drink. Public Health Director Dr. Randall Williams said well water in Dukeville contained lower levels of contaminants than municipal water. State officials raised the standard for vanadium, a contaminant found previously to be too high in many wells, by about 66 times its previous level.

In the case of Salisbury-Rowan Utilities, the overall range for levels of the same contaminants rises above the original state standard for wells near coal ash ponds. The average, however, is below the previous state standard. Speakers accused Williams and other state officials of altering standards that were based on scientifically sound research.

“Buck should be the highest priority rating,” she said. “It has the most people who live close to it compared to the other facilities. If you look at the initial testing, 72 wells were tested and all 72 essentially had contamination.”

Because of questions about contamination, Yadkin Grove Baptist Church Pastor Stanley Rice during the public hearing said he is unable to conduct baptisms at his church. Rice said he’s worried that church members being baptized might accidentally consume some of the water.

In a Facebook Post, however, Edds said he has asked an engineering firm to include the Dukeville community in plans for a county-owned water and sewer system.

Comments made during Tuesday’s public meeting will be incorporated into a final decision about priority ratings, according to DEQ staff. People who were unable to attend Tuesday’s meeting can still submit comments to the state at buckcomments@ncdenr.gov or by mail at N.C. Division of Water Resources, Groundwater Protection Section, N.C. Department of Environmental Quality, Attn: Debra Watts, 1636 Mail Service Center, Raleigh, N.C. 27699-1611.