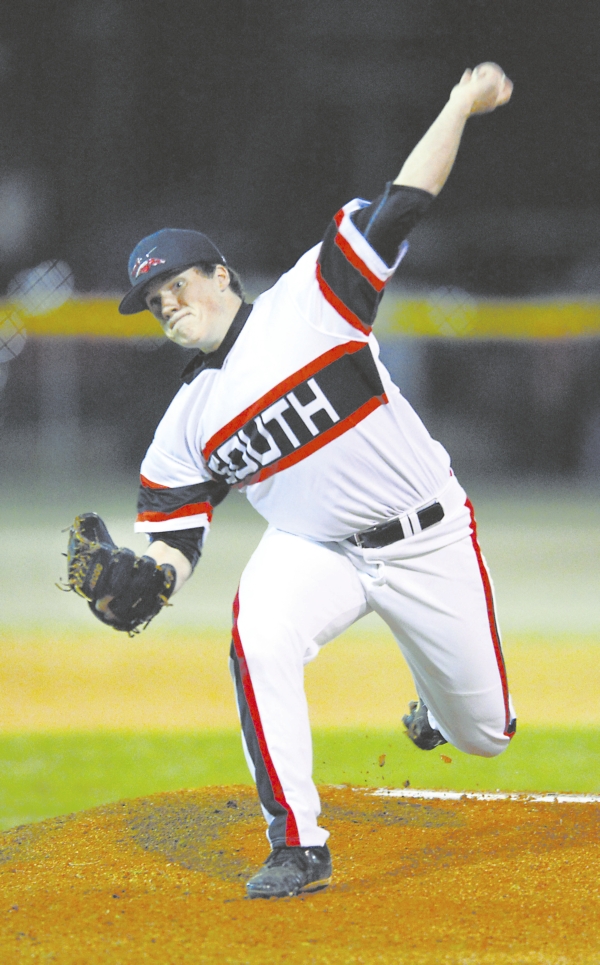 LANDIS — A clean-shaven Thad Chrismon watched winning pitcher Blake Johnson clean the bases with a three-run homer, and South Rowan beat Hickory Ridge on Tuesday for a 5-2 South Piedmont Conference victory.
Johnson’s homer was the first by a Raider since Tyler Fuller whacked one in the 2014 state playoffs. It was the first by a Raider at home since Bo Corriher launched one against Concord on May 6, 2014.
South had been sliding, dropping four of its previous five. That’s why Chrismon, South’s desperate head coach, made the decision to say goodbye to his familiar dark beard and mustache.
“I don’t remember the last time I shaved my upper lip,” Chrismon said. “But we needed a fresh start. We needed a change.”
The key change was that South (5-4, 4-3), which had been starting poorly in recent several weeks, never trailed. The game was tied twice at 1-1 and 2-2.
“We needed to get off to a good start defensively, and we finally did that,” Chrismon said. “And Blake was sharp on the mound for six innings. He did one of the best jobs I’ve ever seen of holding runners on base. Hickory Ridge is a team that can run and likes to run, but Blake held guys on and gave our defense a chance to make plays for him.”
South created its first two runs quietly, with Dawson Larrimore dashing home on a wild pitch in the first inning, and Corriher scoring from first base on a throwing error in the third.
“They got their first two runs without getting a hit,” Hickory Ridge coach Branden Knapp said. “Our guy (Andrew Friends) was throwing pretty well, but we’ve got to make plays behind him.”
Hickory Ridge’s Ragin’ Bulls got on the board in the second inning on Ricky Christie’s RBI single.
Hickory Ridge got hits from Jake Whitcomb (who is batting over .500 for the season), Davis Helms and Jeremiah Boyd in the top of the fifth for the run that made it 2-2.
Heading to the bottom of the fifth, South had been out-hit 8-0, but that proved to be the decisive half-inning.
Larrimore started the inning with an infield hit to deep short. Tyler Rary sacrificed Larrimore to second, and was out at first on a close play. Then a dropped throw on Corriher’s grounder gave South runners on the corners and brought Johnson to the plate.
Johnson, a lefty pitcher who bats right-handed, was supposed to get the go-ahead run home with a safety squeeze on the first pitch, but he bunted through the baseball. Then Corriher stole second base, a big theft that eliminated the possibility of Johnson bouncing into a double play.
With the infield in, Johnson worked the count to 3-2. That’s when he sent his three-run homer sailing over the left-field fence and toward the parking lot. He would’ve been happy with a sac fly. He got a lot more.
“I don’t think it was that bad of a pitch,” Johnson said. “I just put a really good swing on it. It was a great feeling.”
It had been a long time between homers for the Raiders. Chrismon enjoyed watching the ball’s flight.
“Just a huge hit with two strikes from a guy who was just trying to get a run in,” Chrismon said. “That was the kind of clutch hit we’ve been missing lately.”
Johnson walked a batter and hit another in the sixth, but he worked his way out of another jam, getting the third out on a routine fly to left field.
Sophomore Tyler Shephard pitched the seventh for the Raiders. A walk and an error quickly put two men on, but Shephard got a flyball from Boyd to retire a very dangerous hitter. Two routine outs later, the Raiders were winners.
Hickory Ridge (5-4, 3-4) hit the ball with more authority, but the Bulls left 11 men on base.
“We did a really good job of getting runners on,” Knapp said. “But we never got the big hit. Give South credit. When we made a mistake, they capitalized. They did a better job of producing runs.”
On a night when West Rowan, Carson and East Rowan, the league’s frontrunners, were all winning, the Raiders needed this one to keep pace.
“We talked about getting things turned around, and we did,” Johnson said. “I didn’t strike out many guys, but we made a whole lot of plays. I’ve got to give it up to our defense.”
•••
NOTES: A high percentage of SPC games are dogfights. “It’s a tough league, with no bad teams,” Knapp said. “There’s no doubt in my mind it’s the best league in the state.”

Blake Johnson’s homer the first by a Raider at home since Bo Corriher hit one vs. Concord on May 6, 2014.