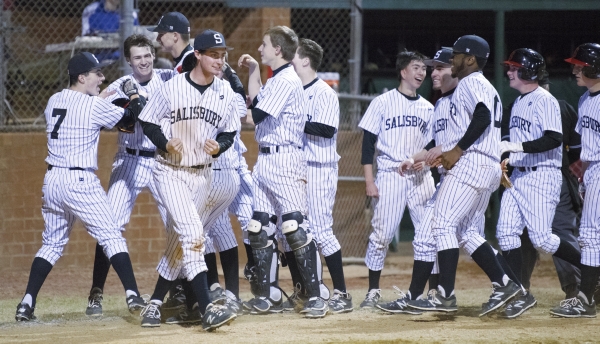 ALLISON LEE ISLEY/SALISBURY POST Salisbury mobs Harrison Smith, who scored the winning run, while Steinman (foreground) pumps his fists. Salisbury won the game, 10-9, in walk-off fashion in the bottom of the ninth inning.

SALISBURY — Salisbury’s Hornets had it, let it get away and then took it back.

As a sunny, comfortable spring day turned into a chilly evening at Robertson Stadium, the Hornets needed a hero to step forward.

Salisbury found several of them and escaped its home diamond with a walk-off 10-9, nine-inning Central Carolina Conference victory over a resilient East Davidson squad.

Coach Mike Herndon’s Hornets seemingly had the game under control throughout, especially after a three-run sixth inning that put the Golden Eagles in a close-to-impossible 8-4 hole.

Salisbury starting pitcher Harrison Smith had allowed just five hits and one earned run through the first six innings. However, the senior right-hander, maybe tiring, was touched for five hits and issued a key walk as East Davidson came to life to tie the game, 8-8.

Four Eagle batters were up, facing the last out of the game, but came through. The key blow was a two-run single up the middle from Augie McIntire that knotted the score.

“I just tried to keep pounding the strike zone, and they found some holes,” said Smith. “It was a little disappointing (losing an 8-4 lead),  but we battled back and got the win, and that’s all that matters.”

After a scoreless eighth inning the Eagles (2-6, 0-1) touched reliever Griffin Myers for a run in the top of the ninth, when hit plunked Tritan Eppley with the bases loaded. Will Steinman came in to get the last out to prevent further damage, with an amazing effort on a come-back grounder that ticked off his glove.

Steinman scrambled toward second base, fielded the slow roller and fired a strike to first base in time to nab the hitter, Luke Bayse.

“Steinman made an unbelievable play right there to keep it at 9-8,” said Herndon. “His hustle gave us an opportunity to at least tie it up or win with two runs, which, obviously, we did.”

Steinman led off the bottom of the ninth with a hard smash, but right at the third baseman for the first out. Alex Yang then drew a walk on a borderline pitch. Bo Rusher, who had three hits and three RBI on the day, lined out to left field and now it was the Hornets who were down to their last out.

However, Smith kept it going with a bullet down the line that handcuffed the third baseman and zipped into left field. John Yang then ripped a hit through the hole into left, bringing home his brother to tie the game once again.

That brought up DH Alex Link, who smashed a hard ground ball off of East second baseman Kenny Shadrick . Smith came around from second base with the winning run.

After losing three games recently by a combined 47-2 score, the Hornets celebrated a much-need victory.

“I’m not saying that East Davidson’s kids don’t deserve it, because they do, but our kids have worked extremely hard and deserved a win like this, especially after the last few games,” said Herndon.

Having leads of 5-2 and 8-4, Herndon knows that it didn’t necessarily have to come down to the bottom of the ninth inning.

“We had a chance when it 5-2 in the third inning, loaded bases and one out … they changed pitchers and we just didn’t take advantage of it,” recalled Herndon. “We take advantage of our opportunities and we don’t have to hold a four-run lead in the 7th inning.

“Smith pitched well,” continued Herndon. “He threw strikes and that’s what we want. As long as our pitchers can throw strikes and we make plays in the field, we’re going to be alright. But we didn’t always make the plays and Harrison’s pitch count got up there. He had 86 pitches going into the eighth and I wasn’t going to let him go past 100.”

Rusher had his three RBI in the first two innings, helping the Hornets to the 5-2 lead. Alex Yang also had an early two-run double.

Salisbury entered the bottom of the sixth inning with a 5-4 edge, but Smith and Link knocked in runs and Steinman swiped third base and scored on the catcher’s overthrow. Suddenly it was 8-4, but it was a lead the Hornets were not able to hold.

The Hornets banged out 18 hits, all but two hitters in the lineup with at least two safeties. Rusher, Smith and John Yang each collected three hits. Will Steinman, Link, Chandler Lippard and Myers followed with two hits each.

“We’ve played some pretty good teams but we haven’t thrown strikes and that’s where it snowballs on you,” said Herndon. “But you keep working hard and doing the right thing, keep believing in what we’re doing and everybody stays bought in, culture wins.”

NOTES: Salisbury gets right back at it today (6 p.m.) when the Hornets host Albemarle.