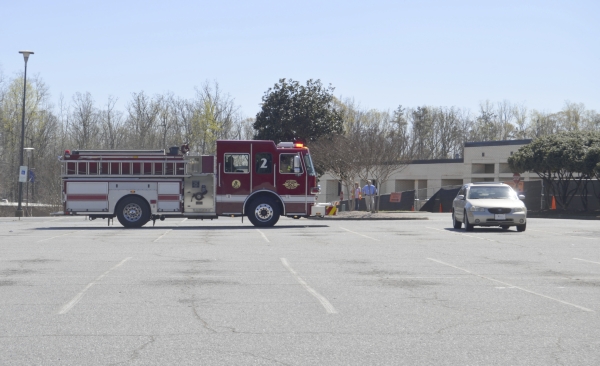 Rowan-Cabarrus Community College evacuated the campus Tuesday after a transformer caught fire between the 200 and 500 buildings. Campus officials say it's believed that a construction crew clipped an underground power line that wound up overheating a transformer. The smoke led to fire in the transformer. Shavonne Walker/Salisbury Post

Brian Donado was in class Tuesday at Rowan-Cabarrus Community College when the power suddenly went out and just as quickly the lights came back on, he said.

Unbeknownst to Donado and his fellow classmates, there was a fire outside the 200 building.

Donado was inside in the 200 building, which sits just off the main campus parking lot, when he and other students began smelling smoke. His class had just begun, and about 20 minutes into it, college officials called for an evacuation, he said.

The power went out around 1:25 p.m., Donado said, and a campus-wide email blast was sent to students just before 2 p.m.

The email explained the North Campus was being evacuated because of an issue with a transformer between the 200 and 500 buildings. The email also said students, faculty, and staff in buildings 100, 300 and 600 should remain in those buildings. Students who had not arrived on campus were asked not to go at that time.

Jonathan Chamberlain, chief officer of facility services, said it’s believed a construction crew clipped a permanent underground power line, and that caused a transformer to overheat. Chamberlain explained the transformer began to heat up and ultimately caught fire with firefighters present on the scene.

Chamberlain said he called 911 around 1:39 p.m. after maintenance personnel were able to check the area to determine what happened.

A second email was sent that detailed that classes beginning before 5 p.m. would be canceled, except for the 400 building. All other activities were told to proceed as usual.

Paula Dibley, director of college relations, marketing and communications, said a large reason the evacuation went so smoothly was because of staff protocol and digital radios, which allow the staff and administrators to talk to each other and on the other campuses.