Yesterday: In 1987, celebrating the 200th anniversary of the U.S. Constitution 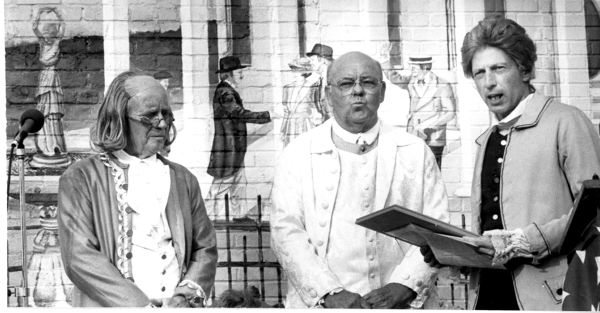 In this photograph from 1987, from left, Dick Messinger, Dr. John Wear and Edward H. Clement stand in front of the downtown mural dressed in early American attire as they celebrate the 200th anniversary of the U.S. Constitution. Clement served as co-chairman for the Rowan County Committee on the Bicentennial of the Constitution. Messinger and Wear has since passed away. The U.S. Constitution was, as Clement put it in 1987, “hammered out” in Philadelphia by 55 men and signed on Sept. 17, 1787. William R. Davie, a onetime resident of Salisbury and for whom Davie County is named, was an important delegate to the Constitutional Convention in Philadelphia, and John Steele of Salisbury was a strong proponent of the Constitution and was a member of the First Congress that submitted the Bill of Rights to the states.