Gary Pearce: The worst is yet to come 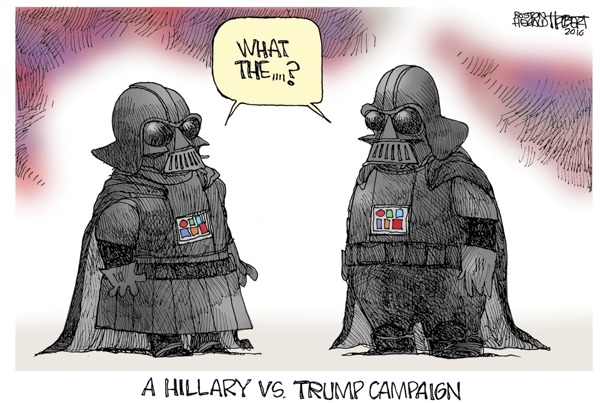 From Democratic political consultant and author Gary Pearce, who blogs at www.talkingaboutpolitics.com:

Barack Obama’s 2008 election was about hope. This one will be about hate.

Two savvy political veterans, a Republican and a Democrat, agreed this week on one thing: a Trump-Clinton race will bring us historic levels of negativity, bitterness and, yes, hate.

The Democrat added, “Hate is a greater motivator than love. It could be a record turnout.”

Trump has the highest negatives of any presidential candidate in history. His bluster, bigotry and boastfulness turn off millions of voters, especially women and minorities.

Clinton has a healthy legion of haters just from being at the center of national politics for a quarter-century, plus all the controversies and Republican-fueled scandals that follow Bill and her like the cloud of dust following Pigpen.

Republicans now have to decide whether to live with Trump or have a bloody convention fight to stop him.

Their dilemma was summed up by another Republican friend. Asked (before Tuesday’s results) about November, she dodged the question by saying the GOP’s best alternative was “a strong Rubio.” Unfortunately, “a strong Rubio” is like a unicorn. It doesn’t exist. And now even the illusion is gone.

John Kasich? He sounded like he just won reelection as Governor of Ohio. Ohio may be a key state in electing a President, Governor, but it’s not the only state.

Which leaves Ted Cruz, who may prove to be more hate-able than Trump.

Trump knows his problem. He was subdued on stage last night. Instead of showing off Trump products, he showed off his family.

Clinton delivered a blistering attack on Trump. She may be losing her voice, but she hasn’t lost her inner warrior.

You think this has been a rough, mean and nasty election? You ain’t seen nothing yet.

My Turn: Heaven help a conservative