Dart: A Lasting Love — the story of Herbert and Brenda Chunn 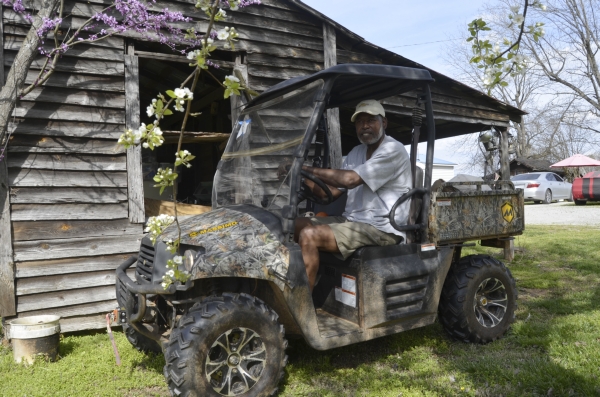 Herbert Chunn sometimes drives across his property on Morrison Road where his wife, Brenda, grew up and where they raised their two sons. The farmland has been in the Morrison family for over 100 years. Brenda died recently and Herbert fills his days volunteering. Shavonne Walker/Salisbury Post

WOODLEAF — Herbert Chunn has long been retired, but he keeps his plate full with volunteer and church work. But in the back of his mind while sitting in his front yard under an oversized outdoor umbrella, his thoughts go to Brenda — the love of his life.

The two met at Lincoln Pool in Salisbury when they were both 15 years old. Brenda had gotten a ride to the pool from Chunn’s cousin, Barbara. He was smitten with her and the two became friends.

Brenda Morrison, as she was known in those days, was a girl from the country whose father and grandfather were landowners and farmers, respectively. The Morrisons owned more than 83 acres in the northwestern part of the county where wheat and cotton were grown and harvested.

Chunn grew up in Salisbury in the Dixonville community and attended J.C. Price High School, the city’s African-American high school.

The two would marry in their early 20s, move to Concord and a little over a decade later would eventually have two sons — Dennis and Kevin. Chunn worked at Cone Mill, but decided against continuing mill work when the topic of retirement came up at a union meeting.

A 37-year-old Chunn made the choice to change careers for his young family.

“I wasn’t ready to retire,” he said with a chuckle.

He filled out two applications — UPS and Phillip-Morris. He chose the latter.

“I figured I’d have a long run there,” he said.

The tobacco company offered Chunn a great salary, benefits, retirement and profit-sharing, he said. And so he worked on machinery, until his 2008 retirement after 20 years.

Now, the 64-year-old Chunn spends many days as a volunteer at Rowan Helping Ministries, and maintaining the grounds at Mount Vernon Presbyterian Church along with friend Charlie Rankin. The church, which was organized by a group of freed slaves who left a nearby Presbyterian Church, is where Brenda attended all her life.

“We were married at that church,” Chunn said casually.

The couple were instrumental in organizing the Mount Vernon Community Garden at Myers Park on Woodleaf-Barber Road.

“We started out as a project to help young kids get involved on knowing where your food comes from,” Chunn said.

It was an idea that children could also learn and grow something of their own.

The community garden began in 2011 and was also a way to supplement the income of residents by providing them with free food. Brenda Chunn helped write grants to fund the garden. The Chunns also purchased a covered shelter for the garden.

“It was something we wanted to give back to the community,” he said.

“Her father asked me to take care of her,” Chunn said.

Chunn kept his promise and moved his family into the home place on Morrison Road with his mother-in-law. The family started out in a white and orange mobile home, situated in a curve on Morrison Road just before the gravel turns to asphalt.

The Chunns renovated the family home to make room for the two boys, one of whom Kevin, now also lives in the family home with his son, Kayden. The couple’s son, Dennis and his wife, Kim, have a daughter, Jasmin.

Brenda worked for AT&T, then went to work as projects manager at Livingstone College and retired from Avaya Communications as a project manager.

Avaya Communications was based in Charlotte, but Brenda worked from home. As an escape, the couple would often go on mini vacations, usually to the Charleston, S.C., area, Kiawah Island and Johns Island on the coast.

Brenda retired at 59, but the couple stayed busy with church work and the garden.

Not long ago, Chunn bought a cherry red convertible Camaro for he and his wife to ride into the sunset on one of their weekend getaways.

The red sports car sits covered in the yard parked between a pickup and Chunn’s other vehicle.

“The thrill is gone from wanting to get in it,” Chunn said.

He drove the car once in the latter part of 2015, but hasn’t had the heart to try again.