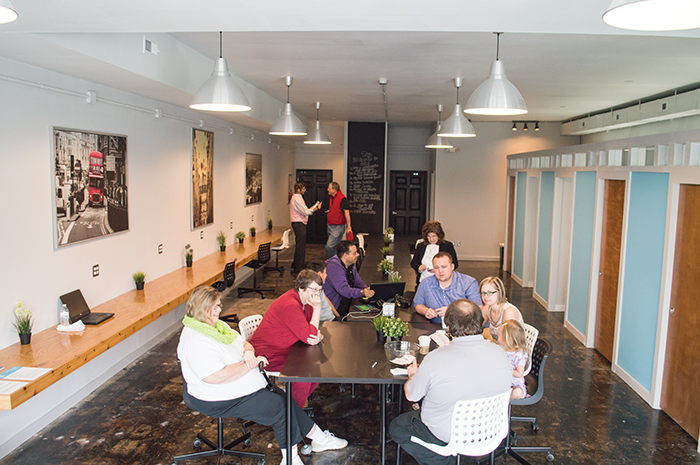 Josh Bergeron / Salisbury Post - A group of people sit inside of 10 Thread, a new business on Fulton Street in Salisbury. The business held its grand opening and open house on Saturday.

Salisbury is the latest home of a global idea that started in California. Called co-working, the concept allows various individuals or groups to work in a shared office space. The concept started in San Francisco and has spread across the world.

Co-working aims to provide the freedom of working for oneself and the structure and community of working with others, according to Brad Neuberg, who created the first co-working space in the mid-2000s. He started the idea at a company in San Francisco.

Salisbury’s incarnation of the concept is named 10 Thread, which sits in the Fulton Heights neighborhood, at the corner of Ridge Avenue and South Fulton Street. At 10 Thread, individuals or small businesses can rent office space, enjoy free coffee, complimentary 1 gigabit-per-second Internet speeds and free access to conference rooms. The building will also be open 24 hours per day to 10 Thread’s customers.

10 Thread Manager Taylor Hutchins said the company can fit 25 to 30 people in its open desk spaces. He stressed the value of 10 Thread’s cheapest package. A small business might pay several hundred or more than $1,000 just to rent an office in Salisbury. He said renting an office would be “wasting money” until a business grows to fill the space.

With as many as 30 people working in the same space at once, City of Salisbury Broadband and Infrastructure Services Director Kent Winrich said young business owners could learn from each other.

“It could be pieces of the core business, like how do I run the business, how do I create an LLC, how do I take care of my taxes,” Winrich said.

Collaboration could also result in a video production company that rents space at 10 Thread producing video for others renting co-working space, Winrich said.

“Instead of being in all sorts of different locations, here they are working together on one project,” he said.

Yesterday: In 1987, celebrating the 200th anniversary of the…