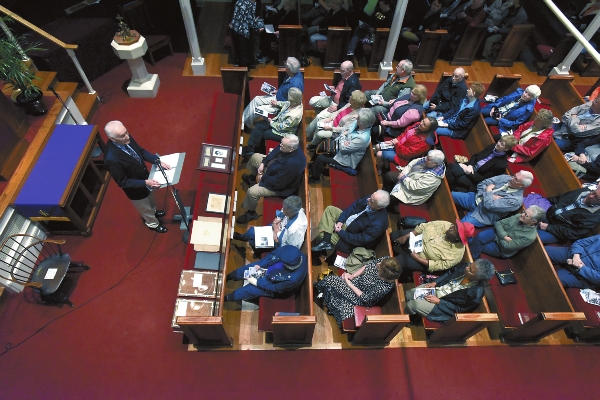 During the Sacred Places Tour, Norman McCorkle (on the left) was the speaker at Thyatira Presbyterian Church. The third annual tour was presented by the Historic Salisbury Foundation. photo by Wayne Hinshaw, for the Salisbury Post

Once, wall ornaments in a Salisbury tavern — the pictures of King George III and Queen Charlotte of Mecklenburg-Streilitz — have traveled across America and back again. As part of his speech on Saturday during the Historic Salisbury Foundation’s third annual Sacred Places Tour, Rowan County native and historian Norman McCorkle focused on his eighth-generation great-grandmother Elizabeth Maxwell and intertwined a story about the two photos of British monarchs. McCorkle was the event’s featured speaker.

“What I’m about to relay is the joys and sorrows of an educated woman living on the American frontier in the small village of Salisbury,” Norman McCorkle said.

When Salisbury consisted of little more than a few dozen residents, Norman McCorkle said a woman named Elizabeth Maxwell and her husband Robert Gillespie moved to Salisbury. In partnership with another man, Gillespie purchased several tracts of land in Salisbury and opened a tavern with his wife. Gillespie died in 1760. Elizabeth Maxwell remarried a man named William Steele in 1763 but the family continued to operate the tavern.

By the 1780s, the American Revolutionary War had engulfed the Carolinas.

Norman McCorkle on Saturday told of an encounter during the war that elicited laughs from the few dozen in attendance at Thyatira Presbyterian Church.

During the war, Elizabeth Maxwell welcomed an exhausted American general named Nathanael Greene into the tavern for refreshments. Various historical accounts published in the Salisbury Post since then have noted that Greene’s leadership changed the course of the war.

Norman McCorkle said Greene, while sitting in the tavern, spotted the pictures of King George and Queen Charlotte. In the midst of fighting the British, Greene was understandably surprised, or perhaps angry, to see a picture of the king sitting in a North Carolina tavern.

On the back of the picture, he scrawled a message: “O George hide thy face and mourn.”

During his speech, Norman McCorkle contemplated whether Elizabeth Maxwell would have left the pictures on her tavern’s wall if she knew Steele planned to ride into Salisbury.

Elizabeth Maxwell’s daughter married one of the first pastors of Thyatira Presbyterian Church — Rev. Sam McCorkle, who is credited with helping create the University of North Carolina. Thyatira Presbyterian Church is also frequently cited as the oldest congregation of any denomination in the western part of North Carolina. Its current facility isn’t the oldest church in Rowan, but there is some indication the congregation met prior to 1753 in a log cabin on the site.

Decades passed before Thyatira became a permanent home for the pictures.

Norman McCorkle on Saturday said the pictures of King George and Queen Charlotte moved to the church in 1980 as a result of a purchase by Locke Neel and his wife Pauline. Norman McCorkle said Locke and Pauline were avid history buffs and financially able to purchase the pictures from a gallery in California. Combined, both pictures were sold for a price of $1,500.

Initially, the pictures were housed in a small room at the church. Norman McCorkle said Neel and Pauline found the small room to be too cramped. In late 1980, both pictures moved into a separate museum on the church’s property. The pictures of King George and Queen Charlotte now sit in a locked display case. After more than 200 years, Greene’s message has faded, but the pictures serve as a memento of Rowan County’s first years.

“If you don’t preserve history, then civilization will cease to exist,” Norman McCorkle said.