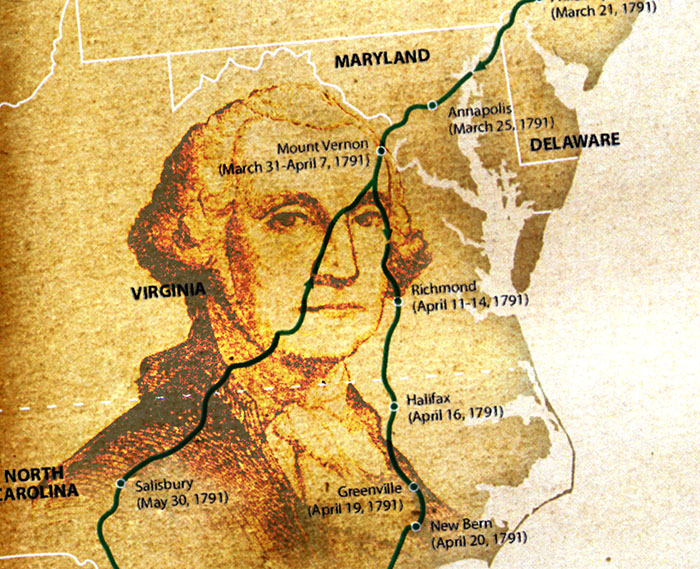 George Washington's visit to Salisbury 225 years ago is being recreated today in downtown Salisbury.

SALISBURY — When you go about planning the 225th anniversary celebration of President George Washington’s visit to Salisbury, there are plenty of things to consider.

How did he arrive, on horseback or in a carriage?

What do you do for music and food? Who should play the role of George Washington? Just how elaborate should the evening ball in Washington’s honor be?

These are all things being considered by a Rowan Museum committee headed by co-chairs Betsy Cunningham and Randy Lassiter, who also are leaning on the historical expertise of Terry Holt, president of the museum board.

Twenty-five years ago, the community marked the 200th anniversary of Washington’s visit here on May 30, 1791. But this year’s celebration — a daylong affair planned for  May 21 — looks to be much bigger.

Already planned in connection to Washington from a historical perspective are a parade, reenactment of a ladies’ tea which Washington attended, speeches by Washington and the men who welcomed him to Salisbury, music by a fife and drum band, the president’s public farewell and departure and a costume ball and four-course early-American dinner that evening — a gala where Washington had participated in many toasts.

The Washington celebration actually will be part of a living history festival in the downtown from 10 a.m.-4 p.m. May 21.

Craftsmen and artisans will be giving demonstrations and displaying their wares. There will be militia demonstrations and reenactments of early camp life. Washington-related artifacts, including his personal letter to Salisbury, will be on display at Rowan Public Library,

There also will be live music and early-American games and stories for children.

The festival and Washington-related events will be taking place in the two-block area from West Innes to West Bank streets, along South Jackson and part of West Fisher streets. This area takes in the Hall House lawn, the Utzman-Chambers House on South Jackson Street, Rowan Public Library, the Bell Tower and gazebo and the old Salisbury Female Academy (formerly the Wrenn House restaurant).

All the day’s events until 4 p.m. are free and open to the public.

The evening ball, which will be held at 6:30 in the Messinger Room of the Rowan Museum, will require tickets and is serving as a fundraiser for the museum.

“We encourage people to come to the ball in costume,” Cunningham said, though it is not required.

Lassiter said the day will be entertaining, patriotic and educational. May 21 also is National Armed Forces Day. Lassiter and Holt have been speaking at various places in recent weeks letting people know of the Washington celebration.

Holt said the committee is using Archibald Henderson’s 1921 book, “Washington’s Southern Tour, 1791” as its reference point in trying to reenact many of the things Washington did in Salisbury.

Lassiter said Lynn Bull, a character actor from Goldsboro, will be playing the role of George Washington May 21.

In more military settings or situations during his Southern Tour, Washington preferred riding into town on his horse, Prescot.

But in Salisbury’s case, Washington will enter town in a white carriage. For the Southern Tour, Washington’s carriage was rebuilt and reinforced so it could put up with the strain of the back-country roads.

Washington usually had an entourage of seven to eight people with him.

Holt said the biggest thing Washington complained about was when people rode out to meet and greet him, so they also could escort the president toward the towns where crowds were waiting.

“He had to ride behind in the dust,” Holt said, explaining the president’s gripe.

Washington appreciated, however, that about 40 young men — “buck tail boys” — greeted him in Salisbury. Buck tails were a sign of independence.

The evening ball in Salisbury was held at the Hughes Hotel, which stood where today’s City Hall is.

Holt said the president was a deliberate, punctual man. At public events, he tried to speak to every woman in attendance and even counted and rated the women from his stops.

Holt said the best way to describe Washington might be as a gentleman, a scholar and admirer of good women, hounds and horses.

On May 21, when Washington arrives by carriage, a parade will begin on Main Street at Thomas Street, turn left on Fisher Street and end about 10 a.m. at the Bell Tower and gazebo on Jackson Street.

Salisbury’s welcoming party in 1791 included Spruce Macay, clerk of the Committee of Safety for Rowan County; Maxwell Chambers, treasurer of that committee; John Steele, a friend of Washington’s and the first comptroller of the United States; Montfort Stokes, a future U.S. senator; Dr. Charles Harris of Cabarrus County, who conducted what was probably the first medical school in North Carolina; and Capt. Lewis Beard, who erected a bridge across the Yadkin River.

Salisbury still has direct descendants of people who were here for Washington’s 1791 visit, and some of them will be playing roles of their ancestors.

Tim Messinger will be John Steele, Bryce Beard will be Lewis Beard and Glenn McCorkle will be the Rev. Sam McCorkle.

Washington began his Southern Tour in Philadelphia, and Holt said he probably waited to start the tour until North Carolina had ratified the Constitution.

He then headed north and into more of the backcountry, touching places such as Augusta, Ga., Camden, S.C., and Salisbury before heading back toward Mount Vernon.

“Charleston put on the dog for him for a week,” Holt said.

Washington came to Salisbury from Charlotte, which he characterized as “a trifling community.”

Describing the land from Charlotte to Salisbury, Washington wrote it was “very fine, of a reddish cast, well timbered, with but very little underwood — between these two places are the first meadows I have seen on the Road since I left Virga & here also we appear to be getting into Wheat Country.”

And this is what he said of the land between Salisbury and Salem: “… very little good land … being a good deal mixed with Pine but not sand.”

For more information on the May 21 commemorative event and the George Washington Costume Ball and Dinner, contact the Rowan Museum at 704-633-5946.