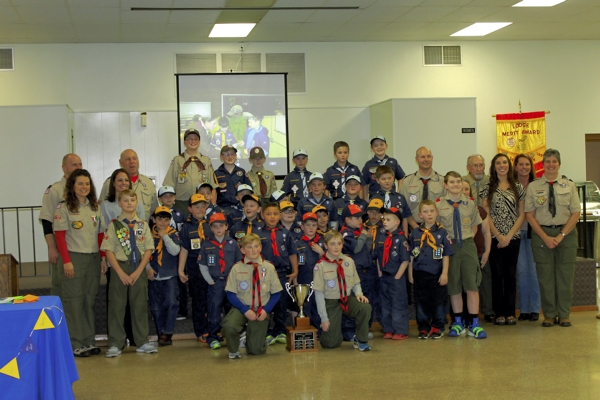 In celebration of Lord Baden Powell’s birthday, the founder of Scouting, Cub Scout Pack 306 of North Hills Christian School held its annual Blue and Gold Banquet on Feb. 20 at the Spencer Moose Lodge.

Guests included leaders from Troop 443 of St. John’s Lutheran Church, who conducted a bridging ceremony for the Arrow of Light recipients to welcome them into their troop.

Pack 306 meets on Thursdays at 6 p.m. in the chapel at North Hills Christian School. If you are interested in joining Cub Scouting for boys in rising 1st-5th grades, contact Stephanie Mesimer, Cubmaster at stephaniemesimer@yahoo.com or 704-239-0062.

The “power of education” and “building a circle of influence” were themes shared by two outstanding women politicians at the annual American Association of University Women (AAUW) Brunch held Saturday, Saturday, March 12, at First United Church of Christ in Salisbury.

North Carolina Congresswomen Alma Adams, who represents the 12th Congressional District, shared “My mother cleaned other people’s houses in Newark, N.J., where I grew up, so I wouldn’t have to do that work.”  Adams attended NCA&T State University for her bachelor’s and master’s degrees, which enabled her to earn her doctorate from Ohio State University.

“I began my career in politics as an angry parent who was concerned about the school system in Guilford County, and today I am an angry grandmother who is still concerned about the access of a quality education for all our children,” said Adams. “I know the power of an education.” After serving many years in local and state politics, Adams was elected to Congress in 2014, becoming the 100th woman elected to that position. However, she pointed out that women make up only 20 percent of the current Congress, even though women are 50 percent of the population.

East Spencer Mayor Barbara Mallett spoke about the challenges for women in politics locally. “It takes a circle of influence to invoke change,” said Mallett.  “Don’t try to do it alone, but reach out and get people to help you.” She referenced examples from East Spencer where receiving grants has helped with different local projects. “It takes everyone working together to accomplish something for the community.”

Following their talks, AAUW Vice President Dr. Patricia Trueblood presented each speaker with a copy of Sketches of Old Rowan, a book of ink sketches by the late Aubrey Atkinson, with related stories by the late George Raynor, former managing editor of the Salisbury Post. The Salisbury Branch of AAUW published the book originally in 1960.

The AAUW Brunch also raised funds for two local students to attend the annual National Conference for College Women Student Leaders. This year’s scholarship recipients were introduced at the brunch. Livingstone College students Kenya Glover and A’Kira Thomas received scholarships of $500 each to attend the Conference June 2-4, at the University of Maryland.

Several other women politicians were introduced at the brunch and thanked for their public service, including Salisbury Mayor Karen Alexander; Jean Kennedy, Rowan-Salisbury Board of Education; Mary Ponds, former mayor of Granite Quarry; and Ada Fisher, Republican National Committee member.

AAUW, a non-partisan national organization founded in 1881, is one of the nation’s leading voices promoting education and equity for women and girls. It has a network of over 165,000 members, 1,000 local branches and 800 college/university institutional partners, including Livingstone College in Salisbury.

The Salisbury Branch of AAUW, founded in 1961, includes both women and men who work to break through educational and economic barriers so that all women have a fair chance. Monthly meetings are held at First United Church of Christ, and a monthly book club, “Outlook Readers,” is held at Trinity Oaks. Dr. Carol Cody serves as president. For more information contact http://salisbury-nc.aauw.net/

The Catawba College Wind Ensemble, under the direction of Dr. Steve Etters, an associate professor of Music Education and director of Instrumental Music at Catawba, will perform. Selections to be offered include Rick Kirby’s “An American Fanfare,” “America, The Beautiful,” “American Spectacular (A Musical History of the United States),” “American Folk Rhapsody No. 1,” John Phillip Sousa’s “Stars and Stripes Forever March,” and a sequence of familiar songs representing each branch of the United States Armed Forces. The Rowan County Veterans Honor Guard will be featured and two Catawba student conductors, Daniel Cline and Hunter Safrit, will be showcased.

After intermission at the concert event, an exclusive screening of a music education documentary entitled, “Some Kind of Spark,” will be offered. The documentary, directed by Ben Niles and produced and distributed by Argot Pictures, has not yet been screened in North Carolina. It follows six inner city kids (ages 8-12) from the New York area as they embark on a life-changing experience – the opportunity to study music at Juilliard Conservatory of Music. Made over a three-year period, the film intimately follows the students and their dedicated teachers, capturing the budding and profound relationships building upon every lesson.

The Patriotic Salute Concert and the screening of “Some Kind of Spark” are free open to members of the general public and tickets are not required.

RALEIGH — Jasmine Jackson from Kinston High School in Lenoir County is the North Carolina champion of Poetry Out Loud and will compete in the national finals in Washington, D.C. in May. The first runner-up was Khaiyah (K-Swizzle) Barber from Voyager Academy in Durham.