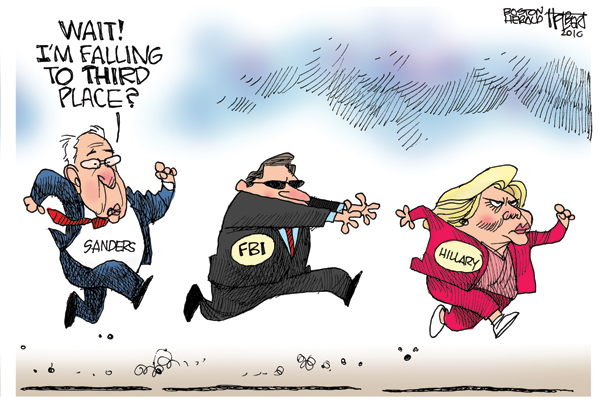 The writer is responding to a column in Wednesday’s Post, “Dissension is not oppression,” by Dr. Ada Fisher.

Dr. Ada Fisher: Please enlighten us as to the e-mails of Hillary Clinton.

You indicate that she has been given a pass on her use of Internet and having a private server. Having an investigation for over three years regarding her tenure as secretary of state is not a free pass in anyone’s book. Finding out she had a private server after six congressional hearings and then announcing it to the world was not smart. Still no free pass.

But the hearings are still ongoing after she turned over some 52,000 pages of information. Someone reclassified some of that information as secret after the fact. That is like stabbing a corpse so it can be called murder. Hardly a free pass.

Information from those papers was released only before primary voting. How convenient. It does sound much like this was all an exercise in propaganda. Could we be enlightened as to who had this wonderful Idea?

And can we also be enlightened as to how many millions of dollars of our tax money was spent on all of this venture?

I applaud the voters in the Granite Quarry precinct for their large turnout in the primary and for their patience in having to wait in line to vote. Voters were courteous and reasonable.

I also commend the precinct workers, town officials and staff, and the Granite Quarry Police and Fire departments for joining forces to allow citizens to exercise their right to vote.

The writer was the Granite Quarry Precinct’s chief judge.

We recently had a large hickory tree fall onto our home. The tree did major damage to our roof, rafters and supporting structures. I called emergency services and within minutes, Chief  Mike Zimmerman, Frank Thompson and his crew arrived and began assessing the situation. It is good to know that your local emergency services quickly respond when you need them. They could not have been more helpful and thorough.

To remain in our house, the tree had to be removed as soon as possible. It was recommended that we contact Ken’s Tree Service. They showed up immediately, gave me a quote and said they would have the tree removed by the end of the day. Sure enough, they returned by 4:30 p.m. and stayed until after 10 p.m. removing the massive tree.

In the meantime, neighbors in White Oaks Acres stopped by to see if we needed any help. We are so appreciative of their concern and help. I contacted Kevin Hall of IBARRAMOON who had recently put a new roof on our home and he and his crew came immediately and stayed that evening until around 11 p.m. to cover our open roof with tarps . I really appreciate him going the extra mile to make sure our home and personal belongings were protected.

Kevin Hall put me in contact with David Trenor of Restorations Plus who arrived the next morning and created temporary wooden braces to help support our ceilings until they could begin to work. We could not be any happier.

My wife and I want to express our sincere thanks to our neighbors and these outstanding agencies and businesses. It is refreshing to see that when difficult times come, your community and businesses will be there to offer a helping hand and provide quality service.

Seems Black History Month should be extended, especially since my letter (“Twists of history,” March 2) sparked such interest and comments.

Regretfully, my critics didn’t like what I said or even what I didn’t say. Liberals always want it both ways. They need to know the space and word limits with the Post.

Since retrogression was on the minds of these people, seems they would have started with Crispus Attucks, the first freedom fighter murdered by the British in 1770. Seems they preferred their fables to facts?

Would it have been arrogant of me to mention Jesse Owens? Also seems none of these brilliant writers knew Rosa Parks was not arrested for sitting in the white section, but for not giving up her seat in the black section to a white man

Janice Truemper not only questioned my motives but even my words. She admitted to being confused. I wonder was it confusion or bigotry, since she pretended not knowing the difference between being beaten or blown away by a rifle. Confused, indeed!

She asked my intent; what was hers? Maybe just looking for something to whine and gripe about?  She spoke of “oneupmanship” by me; maybe she should look at the other comments on my letter.

She concluded that the movement protected the civil rights of everyone. Does that include David Duke?