Jane Smiley: Writing is a pleasure 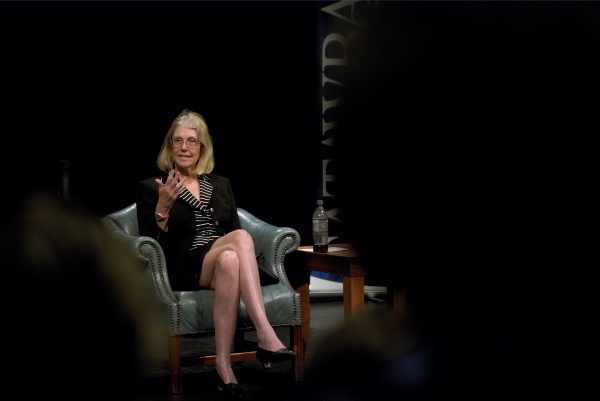 “You spend too much time commuting. … Those worlds are overwhelming. Put your investment in production.” Write more, move less.

Smiley also said, “I don’t want to be inside the club. There’s back biting, trying to find your position in the group. Who needs that?” She prefers independence.

Salisbury author Jennifer Hubbard asked her what happened when she won the Pulitzer Prize in 1992 for “A Thousand Acres.”

“Well, I was four months pregnant, so that took care of that. It all worked out. I could say no.” And she went right on writing her university novel, “Moo.”

Smiley teaches at the University of California-Riverside and Hubbard, once an English teacher, asked her if she had trouble getting through to her students. Smiley said she has her students write drafts, “then we talk about it, analytically, then they rewrite it.” She encourages them to play with the story, fiddle with it. They sometimes talk about silly things — somebody will ask, why are they eating potatoes here, and the student will say, ‘I never thought about that.’ ”

Many of her students are first generation students, Mexican-Americans or others. She loves teaching them.

Her celebration of the novel, “13 Ways of Looking at a Novel” helps them consider plot, characters, structure, setting, etc.

“I also teach popular novels — we don’t get stuck behind James Joyce. … I want them to understand originality is a given.” It’s what they do with it that matters. She tells them to look around and “write about what you see going on. Decide what you like.”

Smiley said she first wrote murder mysteries so she could learn how to create a plot. She’s written many different types of novels. Her research also varies from book to book, sometimes massive, sometimes fairly simple. She wrote “The Greenlanders” about Nordic history. She had read old Norse novels and had a friend who told her if you fell out of your boat in Greenland, the water was so cold, you’d die in five minutes. “I thought wow! I’ve got to write that.”

“Private Life” in 2010 was based on her aunt’s story. She was married to a “crackpot physicist.”  “I had to write five drafts to make the crackpot work.”  With each book she has to figure out in a different way that will make it work.

Writing “The Greenlanders” was slower, but she’d sit down to write and think she’d been working two hours, when eight hours had actually passed. “I was lost in the process.”

She compared pleasure and addiction. For her, writing is a pleasure. When she finally gets to work on a project, she feels good. “An addiction is something that makes you feel bad. You do whatever the action is, drugs, alcohol, writing, and it’s painful.”

She has no writing schedule. Writing is like a puzzle, some bits of it are quickly solved. Her free time seems to pass quickly.

Her husband is dyslexic, so she reads everything to him, then she writes some more, averaging five or six days a week. If she feels stuck, she takes a break, rides her horse or cooks something.

Smiley lived with her single mother, who was the woman’s page editor for the local newspaper. She dressed fabulously and never complained. Complaining was not done in their household. But her mother’s attitude made a difference. “I grew up thinking you could do whatever you wanted to do.”

She considers herself lucky for the era she was born in, between 1946 and 1953. Those children came of age just before the Vietnam war. The boys were worried about being drafted; the girls were going to medical school. When the war ended, the boys came home and went to law school and the women stepped back, and for a long time, they stayed there, at home.  She’d love to write a book about women writers of that era.

Smiley has a talent for seeing simple things that spark ideas for something completely different. She can see the steps to her goal and she just does it.