Duke gets big lead, hangs on to top Yale 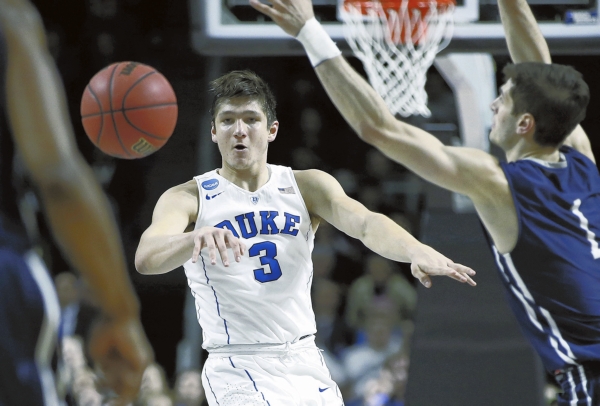 Duke's Grayson Allen (3) passes off in front of Yale's Anthony Dallier (1) during the second half in the second round of the NCAA men's college basketball tournament in Providence, R.I., Saturday, March 19, 2016. Duke won 71-64. (AP Photo/Michael Dwyer)

PROVIDENCE, R.I. (AP) — In a battle of brainy schools, Duke nearly got a tough lesson from Ivy League champion Yale.

After cruising early, the Blue Devils needed some of their most clutch moments in a season which they have often felt as if they were on the brink of disaster to avoid becoming the NCAA Tournament’s latest upset victim.

Grayson Allen had 29 points, including five 3-pointers, to help Duke fend off a furious rally by Yale and advanced to the Sweet 16 with a 71-64 victory on Saturday.

“Our house is on a cliff, and we hope it doesn’t rain,” coach Mike Krzyzewski said. “That’s who we’ve been. And so I really have an appreciation for that.”

Krzyzewski said he remains in awe of a young team that he thought would not even make the tournament after senior Amile Jefferson was lost for the season in December to a foot injury.

The West Region’s No. 4 seed, Duke led by as many as 27 points before seeing that dwindle to just three with less than a minute to play. But steely free throws by freshman Brandon Ingram and Allen secured the defending champions a place in the tournament’s second weekend.

Brandon Ingram added 25 points and five rebounds for the Blue Devils, who will play the winner of top-seeded Oregon and St. Joseph’s.

Yale came close to forcing a needed turnover, but eventually had to foul. Duke connected on four of its final five free-throws to close out the game.

Yale used a 15-0 run to cut what had been a 23-point halftime deficit to 54-47 with 11:38 left. Duke, which sizzled early offensively, missed eight consecutive shots during the spurt.

“We had four seniors on this team, and Duke, they hit us with a barrage of — a heavy haymaker they hit us with,” Sears said. “And we got in the locker room and we said, ‘We have 20 more minutes to make a statement.’”

Duke lost some of its rebounding presence when big man Marshall Plumlee had to go to the bench after being called for his fourth foul with just under 9 minutes to play.

Yale kept chipping away and a tip-in by Sears off a missed free throw by Sherrod made it 67-64 with just 39 seconds to play.

Leading 69-64, Duke missed on a one-and-one opportunity, but Yale couldn’t capitalize on its next possession.

Allen was fouled and he calmly knocked in a pair of free throws.

“We talked about getting it to the point, with five minutes to go, having a chance to win the game, and we got it there,” Yale coach James Jones said. “And I thought we had some opportunities that we literally let slip through our fingers.”

Yale came out energized and briefly took a 13-12 lead.

That momentum was short-lived.

The Blue Devils hit seven of their first 10 shots and went 9 for 15 from the 3-point line in the half as it opened up as much as a 27-point lead.

“The tournament is crazy, and you saw two games today where all four teams won a half,” Krzyzewski said. “Thank goodness for us, we won the last minute of the second half.”

Yale: Outrebounded Duke 42-28. Lost for only the second time this season when outrebounding its opponent. The Bulldogs entered the game 21-1 when winning the rebounding battle.

Duke: Of Duke’s 71 points, 67 were scored by Ingram, Allen and Luke Kennard. …Ingram has made 3-point field goal in 28 consecutive games. … Saturday’s win was a NCAA-record 90th NCAA Tournament victory for Krzyzewski.

HOW SWEET IT IS

The Blue Devils are moving on to the Sweet 16 for the 25th time in school history and 23rd time under Krzyzewski, which is a record for a coach at any one school. Duke is also in the regional semifinals for the 15th time since 1998, the most of any school during that time span.

Yale senior Brandon Sherrod alluded to the adversity that the Bulldogs overcame this season to earn their first NCAA Tournament berth since 1962. It included going 7-1 to end the regular season after captain Jack Montague was dismissed following sexual assault allegations. “It’s been a dream. Yeah, it’s a dream come true,” he said. “Every person dreams of playing in the NCAA Tournament and winning a game. And to be the first team in the school’s history to win one is unbelievable, and to go out like this as a senior is really second to none. You can’t beat that experience.”

Duke: plays the winner of St. Joseph’s and Oregon in the Sweet 16 on Thursday.