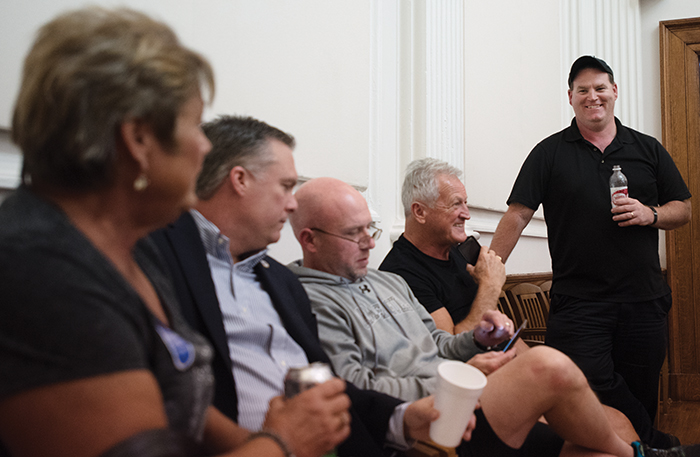 Mike Caskey talks with supporters as they await the results of Election Day at the Rowan County Administrative Offices in Salisbury. Caskey was the top vote-getter in the race.

Rowan County Commissioner Mike Caskey has something in common with businessman Donald Trump.

In the 2016 GOP primary elections, both candidates topped their respective fields in Rowan County. Trump received 1,831 more votes in Rowan in the GOP presidential race than Ted Cruz. The margin between Caskey and the next highest vote-getter in the county commission race was a bit larger, 2,449. Both Trump and Caskey, however, secured victories in nearly every Rowan County precinct.

Caskey won all but four voting precincts in Rowan County. He finished second in one, low-turnout precinct in Salisbury and two other precincts in northeast Rowan County to Commissioner Craig Pierce, who also advanced out of the primary. The two in northeast Rowan County — Ellis and Franklin — contain or are located near Pierce’s residence. Caskey also finished second to business owner and sheriff’s deputy Johnny Love in one Salisbury precinct — West Ward I.

Love’s strongest base of support — where he finished ahead of Pierce — was in Faith and three of its adjacent precincts. He also received notable support from Salisbury voters, which relegated Pierce to third in nearly every Salisbury precinct.

Pierce, however finished ahead of Love in notably more precincts. When Caskey finished first, he was most often followed by Pierce. In total, Pierce finished with 1,086 more votes than Love.

Although Kasich won a precinct, the presidential race in Rowan was largely a two-man race between Trump and Cruz. Kasich finished more than 5,700 votes behind Cruz. Presidential candidate Marco Rubio placed fourth in Rowan — too far behind to receive a significant number of votes. His vote total was 1,092.

Rowan mirrored much of North Carolina, where Trump and Cruz were close and others fell far behind. Kasich, for example, finished fourth across all North Carolina counties. However, he finished more than 270,000 votes behind Cruz. Rubio didn’t cross the 100,000 vote threshhold.

Caskey’s victory in Rowan’s GOP primary doesn’t make him the president of the county. Instead, he and Pierce will advance to the November general election where Democrat Veleria Levy and Libertarian Mark Lyerly await.

Although registration totals are relatively close, Rowan is a deeply Republican county. Registered Democrats don’t turn out to vote in local elections as regularly as Republicans. Raymond Coltrain was the last county commissioner who was not a Republican. Coltrain’s term ended in 2012.