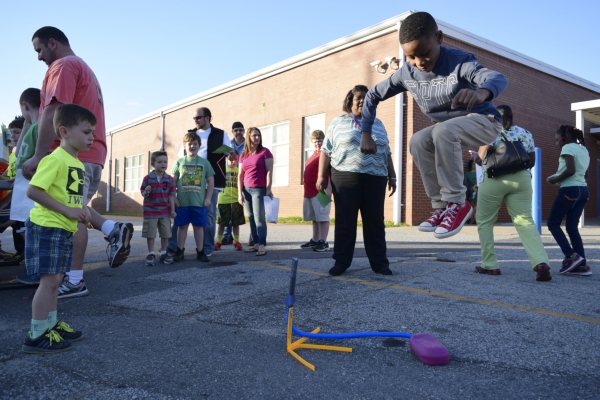 Bryce Dalton takes a running jump at the stomp rocket. Thursday night he got back in line again and again to send his paper rocket soaring. Rebecca Rider/Salisbury Post

GRANITE QUARRY — Kids queue up in the back parking lot at Granite Quarry Elementary. Paper rockets in hand, they wait in line for a “stomp rocket.” Third grader Bryce Dalton places his rocket on the stand, and then takes a running jump for the puffed launch pad. It’s a perfect landing, and the gray rocket soars high into the evening sky.

Granite Quarry Principal Catherine Hinson estimated that nearly 120 students, with parents and siblings in tow, came out to the school’s Duke Energy Science Night on Thursday.

“We’ve never done anything like this, so it’ll be kind of a first for us,” Hinson said.

Stations set up in the gym, the back parking lot and a few classrooms let kids learn about genetic traits, build parachutes and pendulums and study engineering. In the school media center, students could chat with a meteorologist, or study pond water with Pfeiffer biology professor and Associate Provost Mark McCallum.

Funded by a grant from Duke Energy, the night featured 12 stations that kids could rotate between. Each stop featured a fun, interactive project that let kids build and create, while learning about science.

“It was really designed to provide these experiments we wouldn’t have time to do,” Hinson said.

Only 155 schools across North Carolina receive funding for a Duke Energy Science Night, and the nights are considered official events of the 2016 North Carolina Science Festival, presented by the Biogen Foundation. Teacher Jennifer Eagle said she applied for the grant in November, and the boxes shipped around the beginning of the year. The school gets to keep all leftover supplies for use in other science events or experiments.

And students have been bursting with excitement ever since the event was announced.

“I really wanted to do this,” first grader Caroline Lyerly said.

Lyerly loves science, and when her class studied habitats, Lyerly said she did some learning on her own with a Wilderness Explorer’s book. But Thursday was full of new things.

“I’ve been learning a lot of things,” she said.

One of her favorite things was looking through a microscope in the media center. She got a close look at pond water and algae, and said she’d been surprised to see that there were things moving in the water. She also enjoyed making chalk art with a pendulum, and making her own bubble form.

But that’s what she loves about science, she said – the creativity of it.

“You can create things with your own mind,” she said.

Students clustered around tables, blowing bubbles into the sunny evening and tossing up parachutes. Inside, they constructed catapults and ziplines. In line for the stomp rocket, fourth graders John Miller and Deshaun Kluttz said that what they loved about science was its ubiquity.

As the two waited in line to make a rocket, they talked about how static electricity forms when you jump on a trampoline, and how movement expends energy. They both loved the science night, and were looking forward to visiting every station.

“It’s awesome and I think the school should encourage more schools to do these science nights,” Miller said.

For Hinson and the teachers at Granite Quarry, that inspiration is the point.

“We want to get the love of science out there,” Hinson said.

Organization paid only in satisfaction: David Freeze travels with…