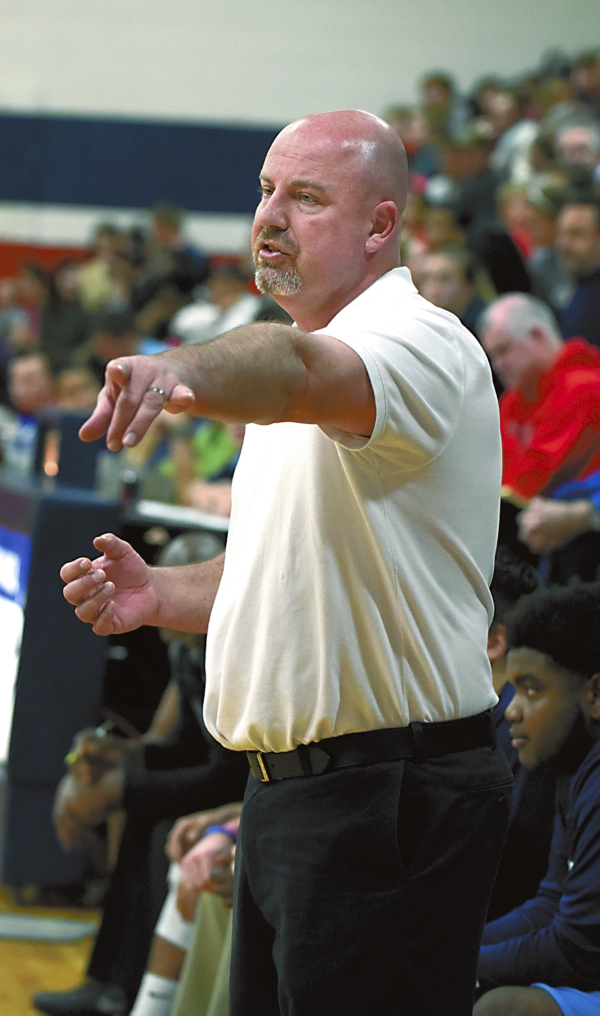 Mike Gurley, coach of the North Carolina boys team in the Carolinas All-Star Basketball Classic, had a blast entering a Myrtle Beach steakhouse with 7-footer Raekwon Long, 6-11 Jay Huff and 6-9 Matt Elmore.
“Everyone in the Golden Corral turned and stared at us because they knew we had to be a basketball team,” Gurley said with a chuckle. “Raekwon told me it got on his nerves when people stared. I told him, ‘Son, speaking for the normal-sized community, enjoy every second of your height.'”
The season that recently concluded was a rough one for West Rowan’s Gurley, whose Falcons were competing in a stacked league that included 3A champion Robinson.
But Gurley’s wonderful track record — 475 victories (373 of them at West Rowan) and three state championships — provided the opportunity for him to coach 10 of North Carolina’s finest against their South Carolina counterparts in the 19th annual Classic.
Slam dunk and 3-point contests were held Friday.
The main events are tonight at Socastee High School in Myrtle Beach, S.C. Tickets are $10.
Morganton Freedom coach Amber Reddick will guide the N.C. girls all-stars in a 6:30 p.m. game. Gurley’s N.C. boys will take the floor 20 minutes after the girls game ends.
Gurley and assistant coach David Dewey met in January to start deciding on a 10-man team from a pool of 60-plus all-stars nominated by coaches from around the state.
“We knew we wanted four posts, four guards and two wings,” Gurley said. “I knew guys from the West, and Coach Dewey (South Johnston’s coach) knows the guys in the East. We’ve put together a really good team. We think it’s one of the best groups North Carolina has ever had.”
Gurley’s shortest player is North Rowan guard Jalen Sanders, a strong, 6-footer. Sanders is the No. 2 scorer in North history. North didn’t get to participate in the state playoffs, so Gurley is happy Sanders is getting a chance to end his marvelous prep career on a high note.
“Jalen has fit in really well on this team, like a fish in water,” Gurley said. “He already knew a lot of these guys from AAU.”
Gurley gushed about Huff, who put up a triple-double, including 10 blocked shots, in Durham Voyager Academy’s win against Winston-Salem Prep in the 1A state championship game. Huff reminds Gurley of Christian Laettner, although Huff said no to a Duke scholarship offer and signed with Virginia.
Long, the aptly surnamed 7-footer who finished a well-traveled prep career at Lincolnton, is headed to Florida International.
Gurley is a North Mecklenburg graduate, so he’s thrilled to be coaching two North Meck stars. Davion Mintz, a 6-3 guard and a scoring machine, is bound for Creighton. Jaylen McManus, a 6-6 forward, has big-time offers, but hasn’t decided on a school yet.
Elmore, from Dixon High in eastern N.C., signed with UNC Wilmington, while 6-5 Zach Cottrell, from the mountain town of Hayesville, is headed to Western Carolina. Zach’s grandfather, Steve, coached Western Carolina for 10 years. Zach’s father Mike starred at Lenoir-Rhyne.
Ian Boyd, a 6-3 guard from Apex, signed with George Mason. Then there’s 6-7 Damani Applewhite from Fayetteville Westover, who’s undecided, and 6-1 point guard Kyran Bowman from Havelock.
Bowman might be the best athlete of all the all-stars. He was committed to UNC for football but changed his mind and decided to pursue a basketball career. He has attracted a number of major offers, including Boston College and Cincinnati.
Gurley said the team put in two productive, 90-minute practices on Thursday, followed by more practice on Friday.
“When you’ve got the talent we’ve got, it’s not about trying to put in plays and patterns in a limited time,” Gurley said. “This is all about sharing the sugar, and guys giving the ball up if they don’t have a good shot. You want guys to have fun in an all-star game and the most fun you can have is by playing hard and playing together. They’re buying in.”
Gurley joked that he petitioned for his own star, Caleb Mauldin, to be the first sophomore allowed to play in the Classic, but it’s still a seniors-only affair.
“I hope to see Caleb play in it two years from now,” Gurley said.
Gurley has coached in even larger events, including the national sports festival in Colorado Springs and Nike All-America Camp, but this bragging-rights battle is meaningful to him.
“South Carolina wins a lot of Shrine Bowls, but basketball is our sport,” Gurley said. “We’ve told our guys that they are not just a bunch of all-stars. They are North Carolina.”
•••
NOTES: The N.C. girls team includes East Davidson’s Bayley Plummer (Appalachian State) and Central Davidson’s Jordan Chavis (Missouri). … North Carolina won both games last year. Cox Mill’s Matt Morgan (Cornell) and Hickory Ridge’s Jaylen Stowe (Mercer) were instrumental in the N.C. boys’ 106-93 victory.