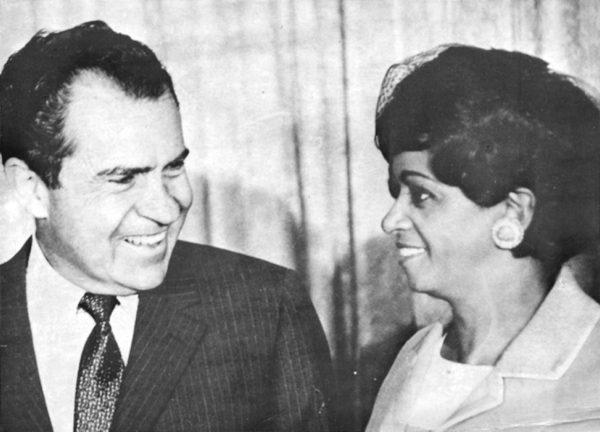 Elizabeth Duncan Koontz of Salisbury shares a moment with President Richard Nixon during her years in the nation’s capital. Koontz was director of the Women’s Bureau in the U.S. Labor Department in the Nixon administration. Koontz died in 1989.

A riddle for modern men and women:

A boy injured in a traffic accident was rushed into the operating room. The surgeon on call scrubbed up, came in, took a look at the boy and said, “I can’t operate. That’s my son.”

The surgeon was not the boy’s father, but the statement was correct nonetheless. How could that be?

If you couldn’t figure it out, Elizabeth Koontz once said, you were living proof that the women’s movement still has a way to go. Why would you assume the surgeon is a man?

While you’re at it, did you also picture him as white?

Koontz used the surgeon riddle during a 1986 interview to illustrate the assumptions and biases that permeated people’s thinking even after she and others broke color barriers — biases still alive today.

“A lot of people who thought they were liberals did not know that they were perpetuating racism because it was not an act against anyone,” Koontz said. “They were allowing certain institutionalized racism bits to continue, but they never knew that. Sexism then followed the same pattern.”

As a black woman, Koontz was well-versed in the subtle turns discrimination could take, though one could argue that they never seemed to hamper her.

A teacher of mentally handicapped children for many years, Koontz rose to prominence as the first black person to be named president of the National Education Association, taking that post in 1968.

She resigned less than a year later to become the top-ranking woman in the Nixon administration: director of the Women’s Bureau in the Labor Department. Her boss was George H. Shultz, then secretary of labor, who became secretary of state.

After she had had enough of Washington, Koontz became North Carolina’s assistant state superintendent of public instruction, taking responsibility for teacher certification and training for 10 years.

After retiring and returning to her hometown of Salisbury, “Libby” Koontz might have sounded like a ‘60s liberal frustrated by ‘80s conservatism. But she knew she’d made an impact. She had to look no further than the status of the top-ranking woman in the Reagan administration at the time – also a Salisbury woman named Elizabeth: Elizabeth Dole.

For not only was Dole prominent in her government, she was doing a job that back in the ‘60s would have been considered inappropriate for a woman. While  Koontz made headlines as head of the Women’s Buraeu, Dole made them as head of the U.S. Department of Transportation. That could hardly be called “women’s work.”

Women’s work was the nemesis of the Women’s Bureau under  Koontz, and she tackled it head-on. That meant talking to employers’ groups, convincing the Labor Department to reverse its stand against the Equal Rights Amendment, getting insurance companies to recognize that men had certain health problems just as women did.

Most important, it meant making women aware that they could choose from a full range of occupations, not just those of secretary, nurse, teacher and the like.

What she did for women she also did for blacks. But Koontz was an even-tempered, unpretentious woman who was more eager to talk about ideas and goals for the future than past accomplishments. You had to talk to others to grasp the magnitude of her deeds.

“She’s one of the really remarkable people in North Carolina,” said William Friday, president of the University of North Carolina system, in a ???? interview. Friday worked with  Koontz through the years on several projects. “Libby Koontz has had a national influence on education and in North Carolina simply because she has worked hard and is a very thorough person.”

Friday called Koontz a “great participator” who never hesitated to meet with students, and he credited her with helping smooth the way for desegregation in the state.

Koontz called on teachers to join together to ease racial tensions. She was instrumental in forming the N.C. Association of Educators, which brought black and white teachers together to pursue common goals. The factors that made her a good teacher also made her a good public servant, Friday said. “When someone is prepared, when someone has mastered the subject matter, they are ready to teach, to present things, to advocate. I’ve never known a time in any context when she was not prepared.”

Koontz also saw the similarities. There was little difference, she said, between recommending that a ninth-grader get a basic education and telling a homemaker with three children to think about her options. “Don’t let your star shine only to the extent of the here and now,” was her message to the women. “One day your children are going to be out of school age and you’re going to have an opportunity to do some other kinds of things. Begin thinking now about what you can do . . .

“It’s really what we call planning, planning in terms of the different stages of one’s life, which is the same thing I was saying to the kids I was teaching in eighth and ninth grade.”

To get to her own preparation, Koontz set out to do neither women’s work nor men’s work.  She simply grew up believing that she had an obligation to participate in the world around her and to take the lead.

“It’s probably in the genes,”  Koontz said of her public service. “My mother, my father were both in education. They reared all of us to believe that if you were privileged to have an education you were also obligated to be of service.”

That took hold with all seven of Samuel and Lena Duncan’s children. Their father died in 1931, when Libby, the youngest, was about 12. But with Lena  Duncan’s determination, they all graduated from Livingstone College and went on to careers as teachers, principals, a college president, a Washington, D.C. commissioner, and so on.

Koontz remembered her mother teaching an adult neighbor to read to the kitchen table while also preparing supper after work. Duncan performed her public service one-on-one.

Koontz decided to become a teacher like her mother. But she took the organizational route, and credited teachers’ groups with paving her path to Washington.

“Things happened to me, I suppose, the way they happened to a lot of women at that time,”  Koontz said. “You had the basic preparation. There was a kind of confidence expressed in you by teachers, citizens. An awful lot of people gave me the stimulus to do these things.”

The problem of “women’s work” was more complicated than women taking some jobs and men taking others, Koontz said. Race added another dimension. While white women complained about being only secretaries, black women were struggling to get that far.

She helped raise awareness of those differences, “so there could not be a put-down of those women to say, ‘You don’t want to take a job as a secretary.’ Oh, yes you do, if the only thing you have to do now is dime-store clerking.”

Many women, she said, just were not considering all the possibilities.

“If one came from a middle-class background, one was not being taught to want to drive one of those big earthmovers,”  Koontz said, as her formerly soft voice swelled with intensity. “But you can get $23 an hour driving an earthmover. You are a head of a family of three or four children, and someone’s telling you that women ought not work at that kind of job because it’s dirty, it’s a man’s job.

“Then you’re going to be a waitress, where you’re not likely to have health insurance, you’re not sure you can get tenure, it’s heavy work, it strains every muscle of your body. Women are going to drive the car and you’re going to tell me they can’t drive that earthmover? That requires the one skill that women are supposed to have, and that was precision.”

She urged women not only to operate typewriters, but to learn how to fix them. Repairmen made a lot more money than secretaries. She pointed women educators toward math and science, fields where they also can expect greater pay. Her exhortations won her the label of “radical,” one that she didn’t shun.

“My radical statements had to do with women recognizing that the name of the game is economics,” she said.

The same excellence and thoroughness she demanded of herself and other women, she also required when she worked for the state Department of Public Instruction.

Dr. Craig Philips, at one time the state superintendent, said Koontz did her job well, bringing to her office a great deal of experience and prestige.

“Libby Koontz was always a first-class, competent — well, I was going to say lady, and she is, but she was professional,” Phillips said.

Her role in the integration of public schools was critical.

“Libby Koontz’s name ought to go in the roster of those giants who made things happen in this state,” he said. “That whole Duncan family has been a strong influence for good . . . You’ll find her hand in every major positive move in social change in this state.”

In retirement, Koontz slowed down a little. But it would be wrong to suggest that her beliefs mellowed, particularly on the issue of race.

“People refuse to accept the fact that there is racism,” she said. It might have become more subtle, but it was still present. “Every Sunday morning at 11 o’clock America is the most segregated nation in the world,” she said.

She said Salisbury had more than its share of substandard housing, and what jobs were available here didn’t go to the group with the highest unemployment rate – young black men. They, in truth, had nothing to do but stand around and be sucked into drug abuse, she said.

“I think there has to be the recognition first of all that this town like others will pay for the neglect of its citizenry,” she said. “It may be that people really don’t mind having their money used to keep people behind bars.”

The Elizabeth Duncan Koontz Humanitarian Awards recognize people from Salisbury-Rowan who have made important contributions to improving human relations in the areas of education, women’s rights, community service. The deadline for nominations is 4 p.m. April 5. For more information, visit humanrelationscouncil.org; to make an online nomination, go to tinyurl.com/2016EDKNomination