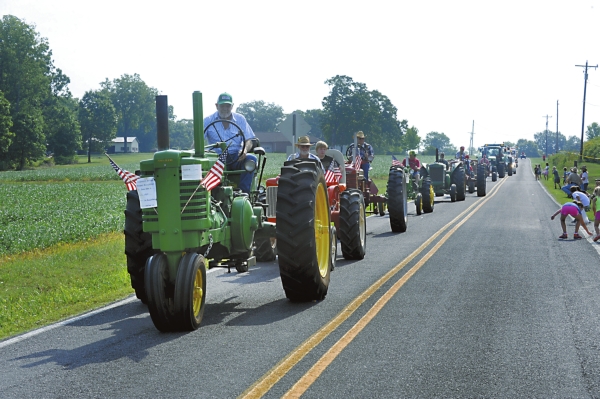 Tractors parade through Woodleaf for the annual tomato festival, celebrating one of the county's many agricultural crops. Wayne Hinshaw/for the Post

Laurels to the people who own and operate Rowan County’s biggest industry —  agriculture. The Rowan County Chamber of Commerce honored area farmers at a breakfast Thursday, and it soon became evident that farmers were some of the biggest business people in the room. Farm gate receipts for the county total $84 million a year, Joe Hampton said — $44 million in livestock and $38 million in crops. Rowan has 121,000 acres of farmland, or 37 percent of the county.

Like leaders in any industry, farmers strive to boost production and conserve costs. Hampton, who heads the Piedmont Research Station, said in 1978 the goal was to raise a 4-pound broiler in 56 days. “Nobody did it,” he said. But today’s average is to produce a 6.2-pound broiler in 32 days with less feed. The improvements come not from adding hormones to the chickens’ feed, as some suspect, but from 1,000 to 1,500 small advancements made through the years, Hampton said. Thank you, farmers, for ensuring an ample and high-quality food supply.

Dart to hackers for releasing personal information about Donald Trump in an effort to sabotage the GOP candidate. Trump’s Social Security number, cellphone number and other info are out there now, but don’t worry about the New York billionaire. Trump can handle it.

What we as a nation cannot handle — or condone — are dark forces manipulating the democratic process to, in effect, take the election out of voters’ hands. That goes for hackers, super PACs (even though they are legal, at the moment) and anyone else trying to influence the election anonymously.

If you disagree with Trump and the emotions he stirs, step into the sunshine and campaign against him. Better yet, campaign for a strong candidate who has a reasonable chance of winning the election and serving ably as president. Who might that be? The answer depends on your politics. One thing is clear, though: this is not an election any of us can afford to ignore.